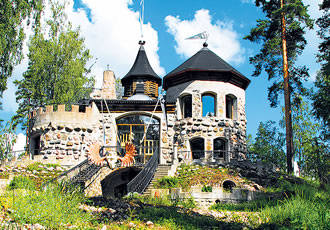 CASTLES are the great edifices of fairytale, towering majestically over the landscape. Many a small child has dreamed of residing in one of these monuments of power someday, but almost all of us have given up on this fantasy.

Artist and seasoned carpenter Reino Koivuniemi was not so easily discouraged and instead decided to build one for himself and his family, one piece at a time. After years of hard labour, the impressive four-story Hiidenlinna was ready for display and opened to the public.

“That first summer in 1991, we had some 15 000 visitors, the same amount that visited the president’s official residence, so that was something else,” Koivuniemi said.

The idea first took shape while he was working as a doorman at Hotel Hämeenlinna in Somero, and had time to plan during the small hours. Inspiration soon followed after he went to see some of the greatest self-made constructions in Finland: “Not the ones financed by loads of community money but the ones put together out of one person’s creativity and skill – amazing artists – the ones whom I truly appreciate.”

Koivuniemi had obstacles to overcome right from the beginning. He was denied a building permit for his lot in Tammela in southeast Finland. “The inspector who went through the building plans didn’t think I had it in me. He looked at me, then at the papers, and thought the contrast was wrong. In his opinion I should have had an architect, which I didn’t, so that was that. But the reception at nearby Somero was wonderful, and I got to choose from nine different lakeside sites, the one I liked the most, so I had good guardian angels there.” 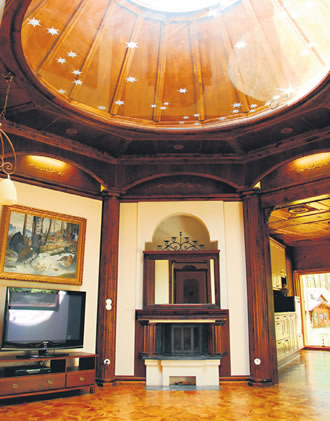 The actual building of Hiidenlinna was made with such a small budget that he could not afford to hire assistants. He received some help from two Estonian building craft students during two summer months, and from his son-in-law and his wife Marja Koivuniemi. But for the most part, Hiidenlinna steadily rose through his own efforts.

But the sheer workload of building Hiidenlinna took its toll on Reino. “There were times when I thought it better to just throw in the towel. But after the second floor was done, I took a week’s holiday, when my wife Marja saw just how exhausted I was. We went on a short trip as it also happened to be her 50th birthday. It helped, and afterwards I was back on my feet again.”

The bottom floor of the building has a cafeteria, with six long, heavy tables, and enough seating to host 60 guests at once. The second floor, called Hiidensali, is where most of Koivuniemi’s carvings can be found and the third floor houses the living quarters. To top it all off, there is a porch at the highest point of Hiidenlinna, with a breath-taking view of the two nearby lakes, Särkjärvi and Siikjärvi.

Some of the main attractions inside include a 5 metre-long knife (Finland’s biggest) hanging down from the lobby ceiling, and Koivuniemi’s main piece of woodcarving, “Ukkohiisi”, covering a whole wall. The ten square metre relief took him five winters to complete and includes life-sized people, 36 animals and a horizon only one centimeter thick. He made all the furniture in Hiidenlinna as well, including a longcase clock, pool table and weapons cabinet.

Koivuniemi crafted his first wooden sculpture (of an elk) when he was six, at his grandfather’s wood workshop. It is still on display at Hiidenlinna. Since then he has been involved with woodwork, although the artist in him emerged later. “As a descendant of a carpeting family, working with wood has fascinated me my whole life. I knew I could make wooden art, but unfortunately it doesn’t pay well, and I had a family to provide for, so I had to find work that did.” But after finally deciding to go ahead and build his life’s work, he quit his job at Hotel Hämeenlinna and put everything he had on the line, and the rest is history. 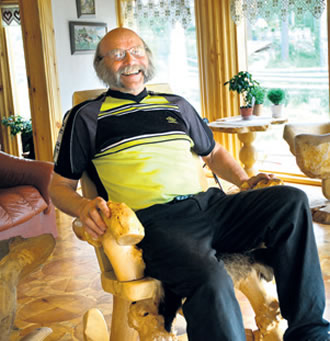 Hiidenlinna is currently for sale, so it’s not too late to become the king or queen of your own castle.