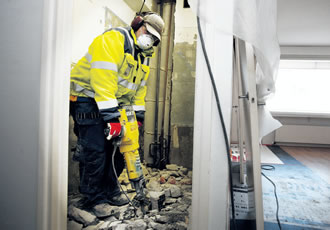 A major overhaul may be necessary, but it may turn out quite tricky for some.

PIPE RENOVATIONS are at hand in many households, particularly in buildings built in the 1970s and 1980s. In bigger buildings, it is possible to remain in the household for the duration of the renovation, but especially in the cases of thorough pipe renewals and smaller places, it is necessary to move elsewhere temporarily.

According to a report by the Federation of Finnish Financial Services, pipe leakage causes the greatest proportion of reimbursable household damage. Up to half of all pipe renovation cases are caused by recurrent leaks. It is estimated that the real surge of pipe renovations is still ahead, as the large group of apartments built in the 1970s and 1980s reach the point of needing overhaul.

This decade will see an average of 10,000-15,000 pipe renovations per year, and even 30,000 in the 2020s. According to a statement by Jari Syrjälä, the Managing Director of construction union LVI-Tekniset Urakoitsijat, housing companies run by tenants are especially lax in maintenance and repair.

What the pipe renovation generally stands for is the renewal of a building’s water and sewer pipelines. In the traditional renovation the estate’s moisture insulations, tiling and water fittings are also renewed, along with the main lines of the basement. Sometimes heating pipes and radiators are renewed in the course of the pipe renovation as well. 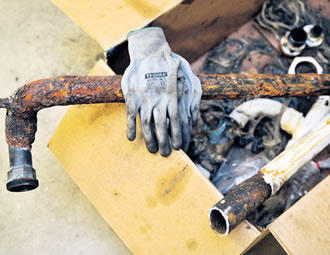 Maria Tuominen, 23 had to move back to her parents’ home as the renovation took place at her apartment from May to July. Many renovations take longer, especially if they include other refurbishments. She says it was nice to be at home as this amounted to fewer expenses, but the situation may be worse for many. The renovation itself often also causes practical problems for tenants.

“The noise was horrendous of course, for a long time. As I moved back, I was missing a shower wall panel, so the water leaked out whenever I took a shower. I tried to prevent it from leaking with towels and plastic bags, and I had to dry the bathroom after showering. The panel wasn’t installed until the end of August, and it only took about 5 minutes,” Tuominen says. “Maybe they got the panels only then, I don’t know.”

Belongings and furniture need to be moved in most cases, especially technological devices and valuables, as construction companies do not account for possible damage. If possessions are left in the apartment, they need to be well covered, and they are often still covered in dust by the end of the renovation.