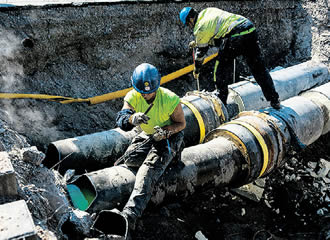 The price of district heating may surge by 70 per cent by 2020, according to the estimates of PTT, the Finnish Real Estate Federation and the Finnish House Owners' Association.

For a family living in a 90-square metre flat this would translate into a 50-70-euro increase in the monthly energy bill, says PTT. Having already gone up by 31 per cent since July 2010, district heating prices have skyrocketed in the 2010s.

"That's a startling figure," says Jukka Kero, the chief economist at the Finnish Real Estate Federation, emphasising that the 70-per cent estimate is the result of a preliminary calculation and not yet an official forecast.

Markus Lahtinen, the research director at PTT, goes along with Kero's view. "There are still many uncertainties. However, the main point is that the district heating price will spiral. The price hikes will be dramatic and rapid," says Lahtinen.

Last year, the monthly cost of district heating for a block of flats in Helsinki amounted to 1.06 euros per square metre on average, accounting for almost a fifth of the average 5.65-euro maintenance fee paid by a flat owner. In Finland in general, residents paid 1.12 euros per square metre for their district heating, translating into almost a quarter of their monthly maintenance fee.

Based on these figures, a family living in a 90-square metre flat may have to pay 50 to 70 euros extra for their energy, depending on the region of the country they live in.

At the beginning of the year, the European Commission released its energy policy, part of the EU's climate programme, setting forth a 40-per cent reduction in carbon dioxide emissions from the level of 1990 by 2030 as the goal. The cost of district heating will be determined to a large extent by how the EU decides later on this autumn to implement the climate programme.

Factors that will influence the district heating cost include the changes in emission right prices, use of renewable energy in production and advances in technology.

Electricity prices may go up 30 per cent by 2020, according to PTT, the Finnish Real Estate Federation and the Finnish House Owners' Association. The owners of large detached houses with electric heating would be hit the hardest by the price hike.

A report published by the VTT Technical Research Centre of Finland earlier this year also predicts a dramatic increase in the cost of district heating already before 2020. The centre has calculated three different scenarios on how the EU climate policy will affect district heating prices but none of these figures is as steep as the rises predicted by PTT, the Finnish Real Estate Federation and the Finnish House Owners' Association.

District heating plants use natural gas, coal, peat and renewable energy sources, such as wood and biogas, as their fuel. Almost 80 per cent of district heating energy is generated by combined heat-and-energy power plants, as excess heat by the industry or from waste turned into biogas.