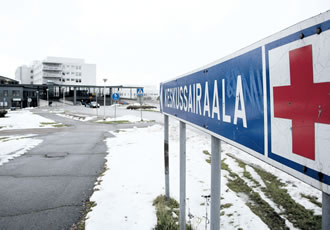 Many of us would be extremely nervous to give birth if we lived hundreds of kilometres from the nearest hospital. But that’s just the way it is in northern Finland.

THE PEOPLE of northern Finland share in the magic of childbirth just like any of us in the urban areas. However, the experience can be quite different, as the round-trip to the hospital can be as long as 500 km.

One couple from Lappland, Kaisa Salo and Tommi Taimi, gave birth last winter to a healthy little boy named Pessi. They live just outside Muonio, 230 km from the Rovaniemi hospital.

Although their situation might seem precarious to many of us, it did not bother the couple. “We were not really worried about it,” Salo remarked. “Normally people around here aren’t.”

Almost everyone giving birth in these remote parts call the local health centre soon after the labour starts, and wait for the ambulance instead of driving their own car. They then make the several hour journey to the closest hospital. 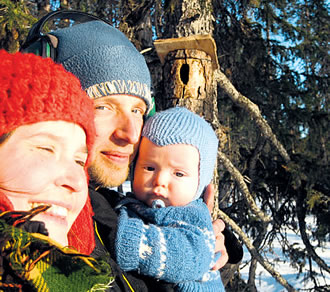 Salo happened to go into labour during a heavy snowstorm. Nonetheless, after a few hours at home with contractions, they called the health centre in Muonio. On the snowy roads, the ambulance took 45 minutes to arrive at their house and then another three hours to get them to Rovaniemi.

Inside the ambulance, Salo was strapped down, immobile. She did not mind this either. “I actually enjoyed the moving vehicle for my labour,” she said. “The motion was quite relaxing.”

Everything went smoothly for the couple. They made it with plenty of time and little Pessi was born safely in the hospital.

Things are not always that easy. Sometimes the coming baby arrives a little early, and the birth happens in the back of the ambulance.

The local midwife in Muonio, Outi Palojoensuu, has been in the profession for over 20 years. She reports that an ambulance birth occurs in one out of five children in her area. This represents approximately six births a year.

She will usually accompany the birthing couple on the road trip. With no doctor on board, the possible birth is in her hands. “Even though we prefer a hospital birth,” Palojoensuu says calmly, “it is always special for me to be the one to deliver the baby.”

The ambulances are well prepared with the necessities for giving birth and Palojoensuu has only had smooth experiences. However, all births on the road are natural, since there is no epidural available to the mother.

Once at the hospital, the care is the same as any baby born there. Because these remote hospitals are usually the only one to cover a large area, often there is only room for the mother to stay with the baby after birth. This was the situation for Taimi, who went to stay in a hotel room for the night.

Soon, with both baby and mother doing well, it was time for the new happy family to make the long drive back home. For this trip, however, Salo was not strapped down. She was able to relax in the back seat of their own car with her little boy while Taimi steered them safely home.