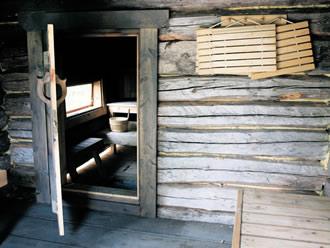 “JOS ei viina, terva ja sauna auta, niin tauti on kuolemaksi” is an old Finnish proverb basically meaning that if liquor, tar and sauna won’t help, an illness is fatal. In the old times, when the availability of medical treatments and medicine was a little more on the poor side, people resorted to myths and folklores, probably to console their despair. Some even claim these three “alternative treatments” actually did the trick, but modern medicine is of the opposite opinion.

Finns just love their sauna, it’s no secret. Back in the old days it advanced hygiene, and after combining it with ice swimming in the freezing cold water, Finns went crazy for this sport, which is said to be “good for your health” and “refreshing for your body and mind”. But actually for those with a heart condition, sauna and ice swimming bears an actual risk of resulting to a heart attack. Even sauna alone, taken to extremes, can result in death. However, experts do admit that sauna can have a relaxing effect, which is good for the health.

Finns are sometimes said to get drunk for any possible reason. Whether it was Easter or Christmas or even the birthday of a pet, Finns might celebrate it with a night out in the town. Some Finns also seem to crack the bottle in order to cure flu or a sore throat, based on the belief it kills bacteria. Back in the old days, alcohol was actually used externally, for example to disinfect wounds. Still, there is no medical evidence that drinking alcohol is an alternative to proper medication.

Tar, acclaimed to have been formed from the sweat of Väinämöinen, a central character from the Finnish national epic Kalevala, was an important medicament to the former-day Finns. Tar actually did bear antiseptic features, which worked as a cure for infections. Lately tar has been recognised to include parts that can cause cancer, and the European Union has urged that its use should be avoided.