Let's face it if you're going to make an all-out action game you could do a lot worrse than using Death of the Four Horsemen of the Apocalypse fame as your protagonist. But does this sequel improve on the prequel's rather patchy gameplay? The short answer is yes, and in spades.

Whereas War took the lead role for the first Darksiders, his older brother (twin?) Death brings with him sone really great visual and audio developments that really draw the player in to the fantastical world within this title. One issue I had with the first game was the repetitiveness of the locations, but here you traverse environments from deserts to dungeons, all of which have been imbued with a severe sense of foreboding. This variety proves the spice of life adage, but it's not the only positive development here. Also new is the ability to pick up armour and weapons from fallen foes and use them or sell them as you wish, or also sacrifice equipment to level up rare weapons. It's a welcome RPG-lite aspect to an already good game. 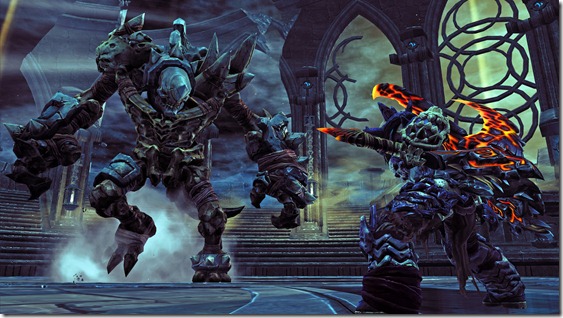 So Darksiders II is a kind of RPG/action/puzzle/adventure title, which does rather sound like the definitiopn of too many cooks spoiling the broth. But rather than coming across as clunky or confused Darksiders II has really developed into rather a unique title, in part to an unusually smooth learning curve. In fact the only negative things about the title are a few performance niggles or occasional unlucky crashes, and a sadly rather, well, underwhelming final boss. Otherwise if you're a fan of almost any gnere of game except for FPS or strategy then you're likely to find something to like with Darksiders 2.