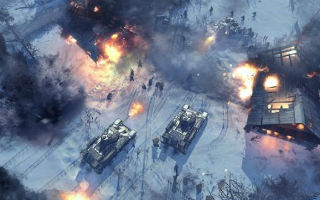 Some delicious news plopped into my inbox today. THQ's Company of Heroes, the classic and brilliant strategy game from 2006, will finally get the sequel it deserves - but only next year. CoH 2 is due early 2013 and will see the player taking control of the Soviet army in repelling the German invaders, etc etc. As we all know, the whole WW2 thing has been rather done to death, but with such a strong pedigree I've high hopes for this one, even though we won't get our hands on it for another 12 months.

"Company of Heroes 2 takes the fight to the snow-filled fields of the Eastern Front as players command the Soviet Red Army during the World’s darkest hour. It is the year 1941, and the forces of Germany have just begun Operation Barbarossa, as they push East to conquer Russia in what would become the costliest conflict of the war. It is up to you, commander of the Russian Red Army, to push back the Nazi invaders and free Mother Russia!

Company of Heroes 2 raises the bar of the standard in PC Real Time Strategy. Powered by the new Essence 3.0 Engine, Company of Heroes 2 features incredible graphic fidelity and cutting-edge technology. With the unprecedented new TrueSight™ system, fog of war is no longer a guessing game as unit visibility on the battlefield relies on true and proper line of sight.

The tactical and dynamic combat system that strategy gamers know and love from the original Company of Heroes returns, and now it’s bigger and better than ever. With the new Commander Abilities found in Company of Heroes 2, players will develop and utilize their abilities in intense new tactical warfare situations. Players will get to experience the up-close moment-to-moment brutality of the war on the Eastern Front through new Dynamic Battle Tactics.