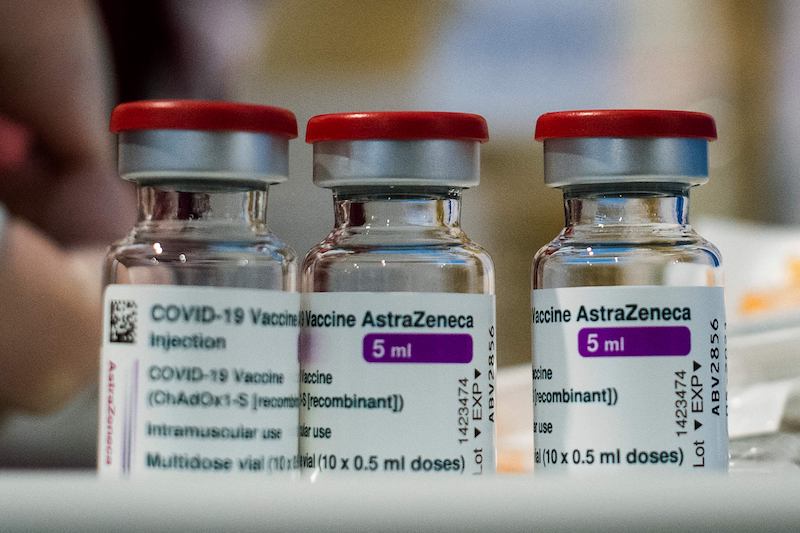 Concerns over reported side effects of the AstraZeneca / Oxford vaccine prompted Italy's health regulator on March 11, 2021 to suspend the ABV2856 batch of the jabs, even while saying there was no evidence of a suggested link with blood clots. LEHTIKUVA / AFP

AstraZeneca on Friday defended its vaccine saying that there was "no evidence of an increased risk" of blood clots, and European and UK medicines regulators have each said the link between the vaccine and blood clots has not been confirmed and that rollouts should continue.

According to CNN, after a group of European countries -- including Denmark, Norway and Iceland -- suspended use of the vaccine on Thursday, Thailand's Prime Minister, Prayut Chan-o-cha, canceled plans to publicly get the AstraZeneca shot on Friday and the country also delayed its rollout.

"An analysis of our safety data of more than 10 million records has shown no evidence of an increased risk of pulmonary embolism or deep vein thrombosis in any defined age group, gender, batch or in any particular country with COVID-19 Vaccine AstraZeneca," the company said in a statement.

"In fact, the observed number of these types of events are significantly lower in those vaccinated than would be expected among the general population," it added.

Bulgaria has become the latest country to suspend use of the vaccine on Friday pending investigations into safety. Prime Minister Boyko Borissov ordered a halt to all inoculation using the AstraZeneca Covid-19 vaccine until the European Medicines Agency "rejects all doubts" about the vaccine's safety, according to a government statement.

The news outlet further reported that the moves came in response to reports of blood clots in a few inoculated people in Denmark, including one fatality. Denmark was the first country to take the precautionary measure, announcing a 14-day break while authorities investigated further.

However, a number of nations -- including Germany, France, the UK, the Netherlands, Mexico and Nigeria -- stood by the shot and reassured citizens of its safety.

The European Medicines Agency (EMA) said Thursday that it did not recommend suspending use of the AstraZeneca vaccine, stating that there is "no indication" the vaccine caused the blood clots in the people who received the vaccine. The agency told countries they could keep rolling out the shot while investigations take place.

"The vaccine's benefits continue to outweigh its risks and the vaccine can continue to be administered while the investigation of cases of thromboembolic events is ongoing," the agency said as quoted by CNN.

The UK's medicine regulator -- the Medicines and Healthcare products Regulatory Agency (MHRA) -- also issued a statement Thursday reassuring the public that the vaccine is still safe and that "people should still go and get their COVID-19 vaccine."

CNN reported that real-world data has also shown that the vaccine is having a significant impact in reducing Covid-19 hospitalizations.

A single dose of the vaccine reduces the risk of hospitalization from Covid-19 by more than 80% in people aged over 80, data from Public Health England showed earlier this month. The vaccine is given in two doses, though countries differ in how far apart they are spreading those shots.

The news outlet reported that concerns about the vaccine's safety nonetheless come at an awkward time for AstraZeneca, with disputes over its supplies to the EU still unresolved. After announcing it would pause the vaccine, Denmark's health authority said Thursday the country would now receive approximately 900,000 fewer doses of the shot.

"The fact that AstraZeneca is once again downgrading the number of doses delivered to the EU and thus Denmark is, of course, both unsatisfactory and a serious challenge," Ole Jensen, deputy director at the Statens Serum Institut, said, as quoted by CNN.

Polish officials also announced on Friday that AstraZeneca will reduce the number of coronavirus vaccine doses delivered there.