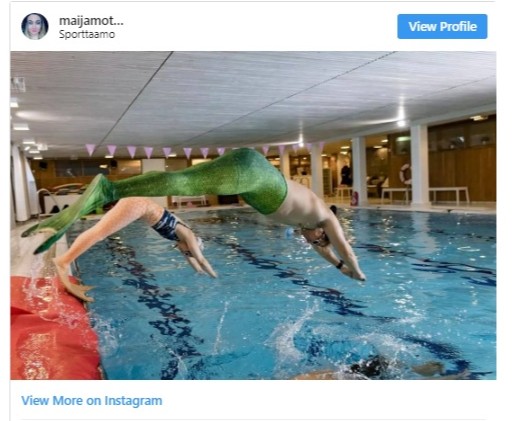 Mermaid scholars in action at Maija Möttönen's class in Espoo

The alternative sports trend and social media craze ‘Mermaiding’ has made its way to Finland, with qualified ‘mermaid instructors’ now teaching classes in Helsinki and Espoo.

The sport, which is believed to have first gained prominence in the United States earlier this year, consists of swimming with the aid of a mermaid tail, allowing the user to move like a fish.

Finland’s first official ‘Mermaid School’ is teaching swimmers eager to channel their inner mythical sea creature at selected Sportaamo leisure centres in Helsinki and Espoo. Swimmers of all ages, genders, and skill levels are welcome, although first-timers must be able to swim for a length of 50 metres to take part.

Swimming instructor Maija Möttönen said in an interview with Yle that the classes have proved instantly popular with the locals, with the programme now having over 100 students on its books.

“I believe [previously] there were more kids mermaiding, but we now have a lot of adults who have taken up this hobby” reported Möttönen, before going on to describe how the sport has become increasingly popular with men as well as women.

The constrictive nature of a rubber mermaid tail has been the source of a number of safety concerns, with authorities in the UK recently issuing official warnings describing the activity as dangerous.

Nonetheless, this has done little to deter would-be mermaids, who continue to sign up in droves to Helsinki’s very own mermaid academy.