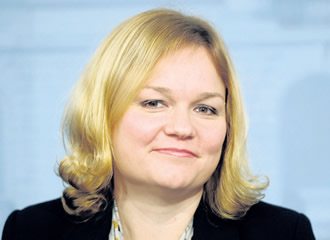 Old and new general education confront each other in high school reform.

Even though the world is not divided into subjects, the distribution of lesson hours between subjects is such a sacred matter that it is almost impossible to touch upon.

Most recently, this “subject protection” was met by the high school reform task force, which delivered their proposal to Minister of Education and Science Krista Kiuru (Social Democratic Party) on 17 December.

High schools currently have up to 18 common subjects, the surface of some only scratched upon by only one compulsory course. One course consists of 38 lessons.

The task force majority’s proposal to reduce compulsory subjects in high school and new interdisciplinary studies has met with resistance.

There are at least two reasons for this. For one thing, teachers’ associations hold on tightly to their livelihood, i.e. their number of lesson hours.

Politicians also listen to teachers carefully; indeed, many have backgrounds as teachers.

The people, for their part, are rarely interested in schools and mostly when there is a threat to change schools to a strange direction that is hard to understand.

Indeed, the abstruse nature of the proposal is also to blame. It talks about common study modules placed in the beginning of the humanistic-social sciences and worldview studies and natural sciences studies and thematic studies placed at the end. This does not sound very clear. Nor do the justifications for a new kind of general education quite hit the mark.

“General education would be a deeper and more structured mutual symbiosis of knowledge and skills, in whose development the student’s enthusiasm for learning would have a greater significance than before,” announces the proposal’s summary and mainly confuses the reader.

With good intentions, one can of course find the core of the proposal: shared introductory courses for different subjects would feature in the beginning of high school studies and advanced courses in the end.

Instead of tanking up on data contents – which today can be gotten from elsewhere besides school – the emphasis would be on, for example, skills for gaining and assessing information and making choices.

Teachers and study advisors would together support the student’s choices toward future studies. But it is of course much easier to justify the “old” general education with familiar subjects from one’s own school days, even though one would not remember anything of them.

“Auschwitz, the Holocaust, the Soviet Union, veterans of our wars, Vietnam, a nation without history...”

Friends of history, for example, have with these heavy arms, defended keeping the subject compulsory for all even in high school, even though in practice students already attend comprehensive school for ten years.

Civics has also had its advocates, although not even the current lessons of, for example, the different stages of decision-making have not seemed to have been learned.

There has been a demand for the head of Krista Kiuru, who has been Minister of Education and Science for six months, because with her decision she has destroyed the general education high school but was persuaded to keep religion and health education as compulsory subjects in the future.

However, in question is only the task force’s proposal, which the minister was careful not to comment on.

There were cautious attempts to get the high school reform started already during the previous government, and the task force was set by Kiuru’s predecessor Jukka Gustafsson (Social Democratic Party) a year ago.

High schools have been criticised as being worn down for a long time, since their distribution of classes and curricula date from ten years ago.

Experts have seen the need for even substantial reforms, but on the other hand, they fear their knockout.

One does not have to search far for an example. The previous government tried to reform comprehensive schools more robustly, but after tough negotiations, the Centre Party nixed the proposal. The Centre Party was not pleased by, for example, drama, which was envisaged as a new subject.

Thus, as the economy grew tighter, in the comprehensive school reform the next (i.e. current government) settled for a poor man’s light version, in which, for example, the number of physical education and civics courses were increased and religion decreased. The changes will come into effect in 2016, which the high school update aims for as well.

The task force preparing the high school reform strived to ensure the progress of the proposal by offering ministers three alternatives and limiting changes to be decided by the government.

For that reason the proposal contains a lamentable flaw: religion or ethics and health education would even in the most radical models remain compulsory subjects because they are mentioned in the Upper Secondary School Act. And the laws are passed by the parliament.