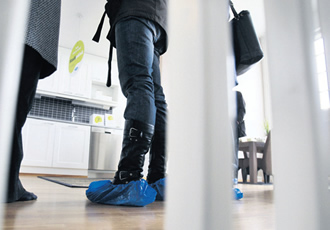 Young applicants are badly treated under the present system, according to critics.

THE RIGHT-of-occupancy apartments systems is in urgent need of a comprehensive overhaul to make it less rigid and unjust, critical industry insiders say. The sector’s umbrella organisation Asumisoikeusyhteisöt ry would above all like to see the present, two-decade-old queuing system done away with as being highly unfair to younger applicants.

Applicants must be above the age of 18 to get a queue number, and jumping the queue for any reason is out of the question. “Nowadays many people see queuing as completely hopeless,” reports Asumisoikeusyhteisöt ry vice chairman Panu Kärnä.

According to the organisation, the State should appoint a working group to develop the right-of-occupancy queuing system, which is widely slammed as dysfunctional. The organisation’s chairman Marko Pyykkönen suggests that a fixed-term queuing system would help, as would stricter monitoring of applicants’ genuine accommodation needs.

The right-of-occupancy market has its roots in the difficult housing situation during the boom years of the late 1980s. In the capital region in particular, rental accommodation was in short supply, and rents were exorbitant. In pre-euro times, widespread acquisition of owner-occupied apartments helped keep interest rates down. The right-of-occupancy system was developed as an attempt to resolve the discrepancy between the rental and owner-occupied sectors.

This type of accommodation became popular throughout the 1990s, but the pace of construction in the past decade has been erratic.

About 40,000 right-of-occupancy apartments have been built in Finland, only around 1.4 per cent of the total number of apartments nationally. Many have questioned the need for the right-of-occupancy system; the branch’s representatives, however, are in no doubt. There were over 25,000 applications for such apartments last year.

“The queues are growing all the time, and supply is never enough,” Kärnä says, adding that failed State housing policy is the root cause of the problem.

Right-of-occupancy cooperatives urge more consistency and far-sightedness in the government’s approach to this sub-sector of the housing industry. “Apartments should be built outside of recessionary times too, which would relieve much of the pressure on the rental sector.

We want a coherent housing policy, with an even and predictable amount of construction,” Pyykkönen says, adding that 5,000 new apartments a year would be an ideal rate of increase.

The right-of-occupancy cooperatives demand that the State support the production of right-of-occupancy housing with “soft”, i.e. interest-subsidised loans. “The municipalities already have the land, all that’s needed now is the funds,” says managing director of AVAIN Asumisoikeus Oy Maarit Toveri.