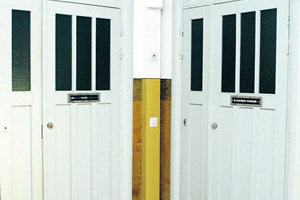 Is Finland really a nation of strangers living next door to one another?

There are certain places it is considered bad manners to look each other in the eye or make small talk: public urinals, whilst riding the London underground, in the corridors and hallways of any Finnish apartment block. But that last one can’t really be true, can it? I know that the general view of the Finn is someone who is introvert and reserved, but surely that’s just a stereotype and not actually reflective of day to day life in Finland?

“I don’t know what it’s like in the city, but out here in the countryside that is far from true,” says my husband, Juha Korhonen, from Käylä, a small village outside Kuusamo. “I grew up here as did many of the other residents of the village and we all know each other. People often pop round for a chat or to say hello and we borrow things from one another all the time.”

Indeed, when I first moved to the small village of Käylä from Manchester, England, one of the hardest things for me to get used to was the way people would just walk into your home unannounced to see if you were home. Coming from a city where front and back doors are double locked even when you are home, walking into the kitchen to find a neighbour sitting at your table waiting for you was somewhat disconcerting.

It’s nice to be nice to your neighbours

What is nice however is the way people greet you on the street, say hello in the shop and wave as they drive past in their car. For an outsider it is those little things that makes you feel as though you fit in and are accepted. Having not experienced Finnish city life myself, I wasn’t sure how true the stories of people not knowing the names of their neighbours or even greeting them in the hallway were really true.

“I have never really had any relations with my neighbours,” says Laura, 34 from Töölö, central Helsinki. “But now I know the neighbours that live above me quite well. I bumped into my neighbour when walking home from gym one day and we became friends.”

“At first we would just go to the gym together in the evenings,” Laura’s neighbour, Ina, 29, tells me. ”And slowly our friendship grew and we started doing things together and confiding in each other.”

“It is nice to be friends with your neighbours. Ina will sometimes come round for morning coffee or we’ll go on picnics together,” says Laura. ”You don’t have to plan to see each other so much when you live so close.”

And of course there are other benefits of having neighbours you can trust. ”When Ina and Henri are away I have their keys and take care of their plants.”

But how usual in urban Finland is this kind of neighbourly relationship? “I know many of my friends that live in the suburbs have become friends with their neighbours,” says Ina, “But I don’t know anyone else in the centre of Helsinki that has such a good relationship with the people they live next door to.”

”A friend commented about the ‘Salatut Elämät’ (TV-series ‘Hidden Lives’) life Ina and I live,” Laura said with a laugh. “I guess it’s not so common in Finland for neighbours to be friends. At least not in urban settings. Often the stereotype is that one doesn’t even say hi in the lift.”

Are we becoming more insular as people?

It’s funny Laura mentioned Salatut Elämät – a Finnish soap opera about neighbours. It seems these days we spend an awful lot of time watching soaps where this easy interaction between neighbours is highlighted. Programmes like Salatut Elämät, Coronation Street and are very popular in Finland, and yet we are so reticent to make it a reality. Are we in danger of living our social lives vicariously through our televisions?

”Even out here in the countryside people aren’t as friendly as they were when I was growing up,” Juha says. ”People spend a lot more time at home on the internet or in front of the TV rather than in each other’s houses. There are very few spontaneous get-togethers any more. It’s like people are retreating inside the boundaries of their closest family and friends.”

”It does make life nicer to know your neighbours,” Ina says. ”I think that neighbours become friendly if they find things in common, if people are open to getting to know each other.”

So I guess like anything in life, your neighbour relations are what you make of them. Yes, it may be possible to live next to the same people for 20 years and never find out their name, but equally it is just as possible to reach out and make a connection with those people.