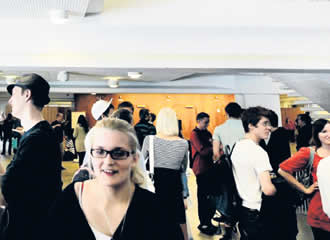 The obligation is set forth in a proposal presented for parliamentary consideration on 14 November by the Government as part of its structural policy programme.

The objective of the proposal is to increase the share of first-time applicants who receive a study place and, thereby, to expedite the transition of young people from secondary to tertiary education, says Immo Aakkula, a counsellor at the Ministry of Science and Education. Higher education institutions will also be obliged to accept transfer students – that is, students transferring from one institution or degree programme to another – and to grant them credits for their previous studies. Transfer students, in turn, will be obliged to forgo their previous study place upon their transfer to another institution or degree programme.

The Government has estimated that the proposed revisions will expedite the transition of young people to working life by roughly six months.

Despite being already able to do so, no higher education institution has yet to introduce a quota for first-time applicants.

The Government has refrained from specifying the size of the quota for reasons of practicality. In the spring of 2013, for example, aspiring students applied to a total of 482 degree programmes that differ from each other in a number of ways.

Applicants who have not completed a degree in a Finnish higher education institution or accepted a study place in one this autumn or later, will be regarded as first-time applicants.

As a result, the revisions will not come fully into effect until years later.

In an attempt to reduce graduation times and lengthen careers, the Government is also set to restrict the right of students to register at higher education institutions as being absent. Students are currently allowed to register as being absent even for their first year of study and thereby to delay the start of their studies.

In the future, however, students admitted to Finnish universities or universities of applied sciences can only register as being absent for their first year of study under certain conditions, such as conscription, parental leave or inability to begin studies due to an illness or disability.

The legislative revisions are scheduled for implementation next August and will be applied to students who begin their studies after the implementation.