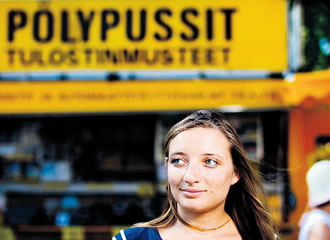 A soft, gentle language, the language of Father Christmas. This is how Italian Virginia Cerchi, 25, describes Finnish, which caught her attention when she heard it on a Nightwish record.

"One of the Nightwish records had a song in Finnish. I started to wonder what that nice language was."

Cerchi searched YouTube for other music in Finnish and came across the Ella and Aleksi children's songs.

This propelled her on a path that first took her to the University of Bologna to study Finnish literature and language in addition to English.

After completing her bachelor's degree, Cerchi sent an application to a master's degree programme in the Finnish language at the University to Helsinki, wanting to become a researcher in linguistics.

Cerchi's story is not out of the ordinary among foreign students of Finnish, many of whom became interested in the language through metal music, explain Finnish teachers working at foreign universities.

Other common reasons for wanting to learn Finnish include Finnish roots or a Finnish partner.

People who can speak an unusual language may find themselves having an exotic job. For the first time in China, a university graduate in the Finnish language has been chosen for a post in the country's security agency, says Pirkko Luoma, who teaches Finnish at Beijing Foreign Studies University. The security agency is a prestigious employer in China.

"I assume the graduate will follow the Finnish press as part of their duties, They won't be allowed to travel abroad at all, but they decided to work for the agency even though a job with an air company was also an option," Luoma says about her former student.

Every year, the Chinese Ministry of Foreign Affairs selects a second-year Finnish student to work for the ministry while others may find work in a bank or an insurance company.

"In China, what matters is that you've graduated from a prestigious university. What you studied doesn't matter as much," Luoma explains.

Many people with an interest in languages have also ended up studying Finnish by chance because of the admission system in place.

In Russia and Germany, students who learn Finnish often do so in order to find work in Finland. Russians often work for the travel industry while Germans are interested in teaching German to Finns. Having good skills in both Finnish and German will stand job applicants in good stead on the current labour market, says Marko Pantermöller, professor of Finnish at Greifswald University. "Germans have noticed that there aren't as many learners of German in Finland as there used to be."

In Karelia, the number of people studying Finnish at university has halved since its heyday in the early noughties, says Varpu Pöntynen, Finnish teacher at Petrozavodsk State University.

"The Russian government has cut the number of free university places and fewer schools teach Finnish. It goes without saying that when the borders open up and learning other languages becomes possible, the interest in the Finnish language slumps," says Pöntynen.

She does not believe that the recent changes in the public opinions and political atmosphere are reflected in the number of students choosing Finnish.

In the US, students rarely learn Finnish with the goal of finding work related to it, says Taija Hämäläinen, who teaches Finnish at the University of Washington in Seattle. Finnish is often the second major.

"In the Great Lakes region, you have traditionally got a lot of students with Finnish roots, but the number of such students has gone down over the last 10 or 15 years," says Hämäläinen.

"Kaurismäki, Aalto, the Dudesons", Hämäläinen lists the reasons, other than roots or music, behind students interest in the Finnish language and culture.

For Virginia Cerchi, not only is Finnish the language of Father Christmas, but the whole country is shrouded in magic, thanks to Finnish literature. Her favourite book is the Finnish national epic Kalevala.

"I wrote my bachelor's thesis on women's magic in Finnish literature. Italian literature features much less magic," she explains.

Has she ever tumbled over the oddities of the Finnish language?

"Maybe when I first came to Finland," Cerchi says, pausing to think for a little while. "Espresso was a misunderstanding. I didn't get one. What I got was ordinary filter coffee in a small cup."