I'm a sucker for karting games, me. There's nothing more fun than downing a few brewskies with your mates and letting loose with some ridiculous power-ups and unrealistic physics. LBP Karting is essentially a fusion of LBP and ModNation Racers, but unfortunately it ends up being less than the sum of its parts.

The general structure is taken from LittleBigPlanet, as your sackboy engages in a loose single-player campaign to unlock tracks. Unlike most (all?) other karting games there are no tournaments or cups to be won and the campaign is compulsory. There are a decent amount of event types on offer, from races to battle arenas and boss fights, which is nice. Also, the karts handle well enough and flying over jumps and screeching round bends is as much fun as always - except it would be, but the AI is often annoyingly brutal, and it's common to defend against one attack and then immediately get flattened by another. Quite frustrating, especially combined with some dull track design enlivened by hairpin turns that inevitably lead to a painful death. 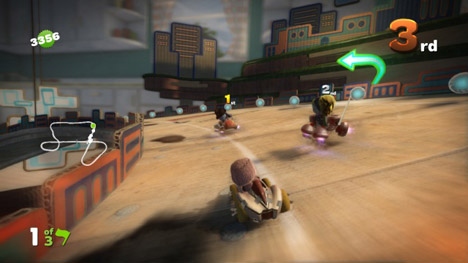 The main problem is that the game feels rather wishy-washy. There's just no real point to it, and the competitive edge which has seen many pints spilled over Super Mario Kart is bafflingly absent. It's such a hassle to get online, and when you do you just play individual tracks before voting on the next one, that it hardly feels worth it.

LBP Karting feels like a missed opportunity. It's missing the basic karting mechanics that made ModNation Racers such a good game, and is it just me or is LBP's whimsical pretentiousness getting old? 5/10