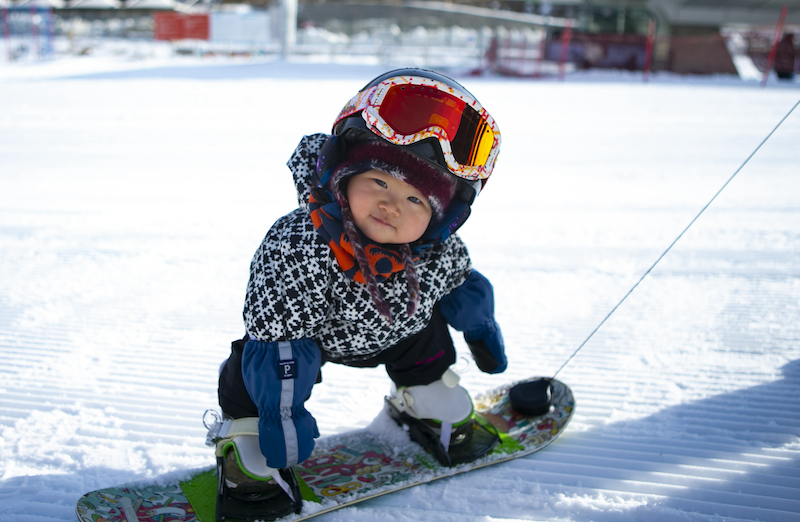 WUHAN, Jan. 17 (Xinhua) Li Yaosheng, a primary school student in the central Chinese city of Wuhan, has rarely seen ice in the so-called "furnace" city, but since 2021, his PE class has been moved to the newly-built ice rink close to his school.

The change sowed the seeds of a new dream for nine-year-old Li, which is to become a professional ice hockey player. "On the ice, I feel that I can really express myself, and I love the way I can fight with less resistance," he told Xinhua.

"The realization of the goal should be greatly attributed to the investment in facility development, the education of youth in schools and the improvement of amateur training at the grassroots level," said Wang Yuxiong, director of the Sports Economics Research Center at the Central University of Finance and Economics.

Having checked his helmet, goggles and gloves, ski amateur Wang Jian flew down the slope at Fulong Ski Resort in Chongli, a district of Beijing 2022 co-host city Zhangjiakou. It could hardly be seen from his smooth movements that Wang is already 72 years old.

"I tried to ski with curiosity when hearing the country's call to involve 300 million people in winter sports, but I didn't expect myself to become addicted," said Wang, who has skied for five consecutive winters.

As a ski instructor at Fulong Ski Resort, Shi Wei found that Chinese people's fervor for winter sports has been on the rise over recent years. "We used to host very few juvenile or elderly visitors, but now kids as young as 11 months and people in their 70s and 80s take part in winter sports here," he noted.

Besides tourism, winter sports have also become closer to students nationwide, as related projects were launched on campuses.

At Dianchang Road Primary School in western Beijing, students can be seen touring the courtyard on roller skis, or practising biathlon shooting.

At the back of the school is a full-scale curling rink that is operational all year round, even in the summer when the temperature reaches 35 degrees Celsius.

Approximately 300 students get to experience a variety of sports - from ice hockey to cross-country skiing, speed skating and curling - often for the first time.

"I have learned a lot about the Olympics at school. I hope athletes can achieve their dreams at Beijing 2022," said 10-year-old Zhang Jinhao.

According to a plan jointly released in 2018 by China's Ministry of Education and General Administration of Sport, over 2,000 primary or secondary schools have added winter sports to their curriculums by 2020. By 2025, the figure should grow to 5,000 schools.

China's first freestyle skiing World Cup winner Guo Dandan has also taken on a new identity: a member of the Beijing 2022 publicity team. In the past three years, she has delivered more than 300 speeches to over 100 million audiences online and offline to promote winter sports.

On the first school day of 2022, Guo visited Wuhan Jilinjie Primary School to share her skiing stories and showed her gold medal to students on the school's rostrum.

"From their reactions, I feel that children in south China have a great passion for winter sports. I hope my story can introduce more people to ice and snow sports and maybe they'll find it fun," Guo noted.

The soaring demand from the public has fueled a boom in the construction of snow and ice facilities.

The boom in winter sports has also helped to improve the livelihoods of thousands of Chinese people.

Zhang Erkui runs a restaurant named Hualangge in Hongping Town in the deep mountains of Shennongjia Forestry District in Hubei. For a long time since its opening in 1999, Zhang had rarely seen any tourists and customers in winter due to the cold.

"Thanks to the construction of ski resorts in our town, more and more visitors come in winter and we can do business year-round," said Zhang, who can earn over 40,000 yuan (nearly 6,300 U.S. dollars) during winter in recent years.

In Chongli, once an impoverished county in Zhangjiakou with limited agricultural income, the change was even more stark. In 2015, 16.8 percent of the 100,000 residents in Chongli were classed as living below China's national poverty line.

But this mountainous town, which will stage most of the snow events during Beijing 2022, has been transformed into a skier's paradise. In 2019, the New York Times named Chongli as one of the 52 ski destinations worth visiting.

In May 2019, Chongli was officially lifted out of poverty. Nearly a quarter of Chongli's population is employed in ski resorts or related companies and organizations.

"The Games represent a formidable asset to accelerate long-term development. This is what has been done for Beijing 2022, and we've learned a lot," said International Olympic Committee's Olympic Games Executive Director Christophe Dubi.

According to data released by the Ministry of Culture and Tourism, Chinese people made 254 million winter sports-related trips last year. The upcoming Winter Games are expected to further boost winter sports with an estimated 305 million trips by the Chinese people during the current winter season.

Regarding Beijing 2022's goal to get 300 million people on slopes and rinks, IOC President Thomas Bach believed "this will be a huge legacy for global winter sports."

"It will also be very important for the legacy of the Olympic venues because, with this participation, the use of these venues after the Olympic Games is secured," Bach said.

With the Winter Games just around the corner, the Beijing Organizing Committee for the 2022 Olympic and Paralympic Winter Games (BOCOG) published its plan for post-Games utilization of the competition venues.

According to Li Sen, the director of the General Planning Department of BOCOG, Beijing 2022 will use six competition venues left from the 2008 Olympics heritage. Meanwhile, all newly-built venues have fully considered post-Games utilization at the planning stage.

"After the Games, the venues will actively bid for and hold high-level sports events. The venues will also be operated in all seasons and be fully open to the public," said Li.

Besides the venues, experts believe that Beijing 2022 will have far-reaching influence on the ice and snow industry as well as the country.

"The Games is no passing fad. I'm confident that the Beijing Winter Olympics will leave a legacy of talent, infrastructures, and technology, as the 2008 Beijing Olympics did," said Wang Jun, vice president of the Wuhan Ice and Snow Sports Association.