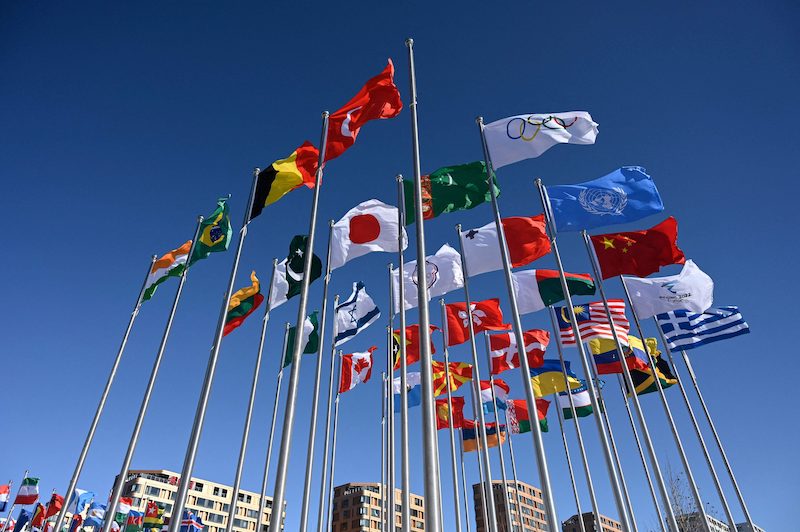 1. The Beijing Winter Olympics will open in less than a month, how has the preparations affected your work in Finland?

Preparations of the Beijing Winter Olympics have been going on well so far. As President Xi Jinping said in 2022 New Year address, “The world is turning its eyes on China, and China is ready.” We are expecting a grand gathering of the world’s best winter sports athletes in Beijing.

In recent years, cooperation in winter sports has become a highlight of China-Finland practical cooperation and people-to-people exchanges. The 2019 China-Finland Year of Winter Sports was held successfully, with the cooperation fruits and spirits still shine to date. Last month, I was present at the China-Finland Sci-Tech Matchmaking Event for Olympic Winter Games, hosted by the Ministry of Science and Technology of China and the Ministry of Economic Affairs and Employment of Finland. At the event, dozens of universities, research institutes and enterprises of both sides had in-depth exchanges on winter sports sci-tech and industry cooperation.

This year marks the 70th anniversary of China-Finland Olympics cooperation. As Chinese Ambassador to Finland, I look forward to a new chapter of China-Finland friendship starting with the Beijing Winter Olympics, and hope the two sides work together for a shared future. The Embassy of China in Finland is coordinating with the Finnish Olympic Committee and relevant parties, and is ready to offer facilitation and assistance according to regulations to those who will go to China for the Olympics.

2. What do you think about some countries announcing that they are not sending diplomatic representations to the games?

The Beijing Winter Olympic Games is a grand gathering for global winter Olympians and winter sports lovers. Politicizing sports should not be an option. China welcomes all kinds of participation of and support from the international community and people of different sectors to pursue the new Olympic motto “together”.

Last month, the 76th Session of the United Nations General Assembly adopted by consensus the resolution on Olympic Truce for the Beijing Winter Olympic Games. 173 countries co-sponsored this resolution, including Finland. The IOC, the G20 and other international organizations and multilateral mechanisms also voiced their call for supporting the Beijing Winter Olympics. We are confident to deliver a streamlined, safe and splendid Olympic Games, with the joined efforts of all parties and the guidance of the Olympic spirit. The Games will also bring confidence and strengths for people all over the world in the fight against COVID-19.

3. Organising the game has been costly, do you think it has been worth it for China?

Since the bid, the Beijing Winter Olympics has been widely supported by the Chinese people. As the first dual Olympic city, Beijing has been following a green, inclusive, open and clean approach in hosting the Olympics, implementing the IOC sustainability policy, and comprehensively advancing sustainable development in economy, environment and society.

For instance, for the first time in the Olympic history, all 12 Olympic venues will be powered entirely by green and renewable energy. It is also the first time where new CO2 refrigeration technology will be used in large scale, resulting in near-zero carbon emissions for some venues. As for low carbon transportation, 85% of the vehicles used for the Games will be powered by clean energy. Existing venues will be made full use of, with only one newly built for ice sports events. As a long run, practical post-Olympic plans have been made for all the venues.

Taking the Beijing Winter Olympics as an opportunity, winter sports have been more prevalent in schools and communities and people have better access to the facilities. The vision of “encouraging 300 million people in winter sports” is gradually turning into reality.

4. Some Chinese Olympics athletes have been training in Finland, can you tell us a little bit about that?

The exchanges and cooperation between Chinese and Finnish coaches and athletes have been enjoying great progress in recent years. Despite of COVID-19, the momentum remains strong, with six national winter sports teams of China training and competing in Finland last year alone.

Last month, I paid a visit to Ruka training center and the Chinese freestyle skiing athletes training there, witnessing their excellent performance in the FIS World Cup. I have also visited Vuokatti training center before and met the Chinese cross country skiing team and ice hockey team. Based on some rough statistics, the number of Chinese winter sports athletes training in Finland in recent years exceeds 1000 person-time.

Training cooperation also brings opportunities to both Chinese and Finnish athletes to learn from each other. Not long ago I read an interesting story that a Finnish young athlete, encouraged by the hard training of Chinese peers, made great progress in his sports career. Surely there are more of such mutual-learning examples.

5. China has pursued a zero tolerance policy regarding Covid-19 to protect the games, what does that mean and how successful has it been?

COVID-19 prevention and control is the key to the success of Beijing Winter Olympics. Ensuring health and safety of all participants is always our top priority. We work together closely with the IOC and the IPC to issue key policies and two versions of the playbook, formulating clear measures in remote prevention and control, vaccination, entry tests, closed loop management, etc.

From last October to December, various test matches were held in Beijing, with more than 2000 athletes, team officials and international technical officials going to China. These matches and training were strictly organized in accordance with the standards of the Games. Judging from the results, the countermeasures proved effective.

China will continue to closely follow the pandemic situation, work with all relevant parties and face the challenges in a science-based and flexible approach.

6. How are the athletes' health is checked and transmissions prevented?

Taking closed loop system as an example. It is the core measure of the Games. Each of the three competition zones has its own big closed loop, and the venues, accommodation facilities and other working places of each zone constitute small closed loops. Locations are well connected by dedicated transport. Within the closed loops, the flows of athletes and other groups are carefully organized so that they do not cross with each other. Athletes can have fairly free movement within the closed loops, where there are shops, sports facilities and restaurants like small communities.

Another important countermeasure is testing. Sample collection sites are located in the Olympic villages and other specific venues, according to athletes’ needs and their convenience. In order to provide better accessibility and timely testing, all sites will operate from 6am to 11pm. Athletes can visit at anytime during opening hours, and the results will be notified as soon as possible.

It is believed that as long as everyone abides by relevant countermeasures, risks can be effectively reduced and athletes can train and compete safely, so as to guarantee everyone’s health and convenience.

7. Is it possible for Finns or other nationals to go and watch the Games in person?

In view of the complex global pandemic situation, in order to prevent the possible spread of the virus and ensure the safety of all participants, the organizing committee has already announced that tickets will be sold exclusively to spectators residing in the Chinese mainland.

For people outside the Chinese mainland, it is a pity indeed that they cannot watch the Games on site. However, if there is anything positive that the pandemic has taught us, digitalization will be one. Many people are getting used to staying at home and enjoying cloud communication. Press from all over the world are important participants of the Games as well. Media centers are established for accredited and non-accredited press both inside and outside the closed loops to facilitate their reporting. Let’s expect they will bring the splendid Games to our screens.

I would also like to mention that the Beijing Winter Olympics coincide with the Chinese Spring Festival. I hope through their broadcasting and news reports, Finnish friends can have a taste of the festive atmosphere of the Chinese and have an experience where sports meet culture, and the East meets the West.

8. What events will you be personally following? How do you think China will perform?

Of course I would like to pay my attention to as many events as I can. Personally, I had my first encounters with winter sports in Finland. I watched ice hockey games and tried cross country skiing for the very first time here, and these happen to be Finland’s strengths. During my visits to the Chinese training teams in Ruka, I also got to know of freestyle skiing. So perhaps I will watch these events more closely.

The Chinese athletes have made tremendous efforts for the Games. I sincerely hope their hard work will pay off as they compete at home. I also wish athletes from all countries safe, healthy and could get good results.