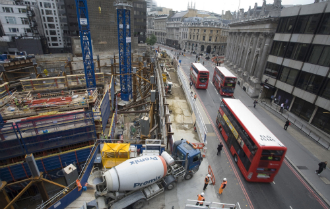 That wasn't enough. Four years after moving in, PwC is paying 100,000 pounds for new barriers to protect against flooding below ground level.

"There's a serious risk," said Jon Barnes, head of building and technical services at PwC in London. The flood doors, which will be installed in the next few weeks, are for "critical plant areas so that if we do have a flood, we're not destroying our transformers."

With global climate-change talks in Lima, Peru, unlikely to make much progress in slowing rising temperatures, the incoming Republican majority in the U.S. Congress threatening to stymie action and cities such as New York and Jakarta gearing up multibillion-dollar defences, Londoners are just getting on with it.

Each metal-plated and sealed door at PwC is among myriad steps by local officials and companies to counter the predicted effects of global warming in Britain: more heat, more intense rain and higher seas.

At least 167 cities and regions around the world – from Copenhagen to Cape Town and from Boston to Melbourne – are developing coping strategies, according to ICLEI-Local Governments for Sustainability, a Bonn-based association of more than 1,000 cities and towns.

London has "one of the most advanced climate-adaptation plans in the world," said Kerry Constabile, who leads work on cities and regions for United Nations Secretary-General Ban Ki- moon's climate-change team.

Kevin Reid, project manager for Mayor Boris Johnson's Drain London program, says he's working with boroughs, schools and hospitals to make them aware of risks and preventive steps, even simple ones such as putting basement generators on platforms, raising door thresholds and stocking up on sandbags.

"No one's sitting around with pots of money," Reid said. "If they do need to do some more substantial work, they can then begin to plan those in their forward-looking capital investment programs."

Johnson has limited direct power and so is working with local agencies and institutions, along with companies in the city, which contributes more than a fifth of the British economy.

Take Transport for London, which manages subways, buses and roads. Climate-proofing is built into its work, according to Helen Woolston, sustainability coordinator at TfL.

One example: a program to install white panels atop the capital's trademark red buses to reflect the rays of the summer sun and keep the vehicles cooler. After 10 years, 98.5 per cent of the fleet of 8,700 has white roofs.

With droughts predicted to become more frequent, the agency has begun installing tanks to collect rain at depots, said Woolston. That means trains will be washed even with water restrictions.

TfL also is looking at how to prevent torrential rain from bringing traffic to a standstill. From March, it will begin testing different road surfaces, including porous ones that can hold 26 per cent of their volume as water, a bit like sponges.

Increased downpours are also a concern for Thames Water Ltd., which provides drinking water and manages sewage. The utility is working with Southwark Council in south London on a 4 million-pound project to prevent surface water from overwhelming sewers and flooding basements.

Storage tanks called swales are being installed under landscaped portions of Dulwich Park to collect torrential runoff and release it gradually into the sewers. The tanks are slated to be completed next month, according to Kyle Robins, an infrastructure manager at the company.

"A peak of a storm lasts for less than three hours," said Robins. "If we can let the whole thing drain down in 24 hours, we've reduced the risk of flooding because the same volume of water reaches the sewer but at a much slower rate."

Plants also can help absorb rainfall and moderate temperatures. Retailer John Lewis Partnership Plc last year replaced a raised cobbled area outside its corporate office near Victoria Station with a sunken garden that can absorb runoff from the road.

Under a 2 million-pound "Pocket Parks" program, the mayor is trying to mobilize local authorities and volunteers to create 100 green spaces on derelict land. He's promoting plant-covered "green walls" and working to increase tree cover by 5 percent by 2025.

"Planting trees has a multiplicity of benefits," said Johnson's environment adviser, Matthew Pencharz. "Trees help cool down the city and lower the urban heat-island effect. They improve the air quality. They attenuate floodwater."

Then there's the main defense: the Thames Barrier, which spans 520 metres across the river and has 10 steel gates that can be raised to keep the tides out. Completed in 1982, it was designed to withstand a 1-in-1,000-year flood.

"Last December, we had the biggest tidal surge since the 1953 floods," Pencharz said in an interview in the downstairs cafe at City Hall, just downstream from the PwC building. "I'm sure it would have come over here – it would have overtopped that embankment and come into our basement."

With sea levels climbing, England's Environment Agency has a 100-year plan to maintain the barrier and other defenses. Using a base case that seas will rise by 90 centimetres this century, it says protection is sufficient until 2070, with a decision needed on new defences in about 2050. That plan, which has a 1.5 billion-pound, 25-year initial phase, can be altered if the water rises faster.

"Climate change is absolutely at the heart of what we do," said Simon Hughes, deputy director for London at the Environment Agency. "We've got in place continual monitoring of key metrics of climate change to make sure we're not sleepwalking into danger."