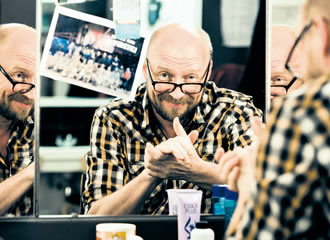 Besides being an industrious voice actor, Antti Pääkkönen also has 60 National Theatre roles under his belt.

Actor Antti Pääkkönen just turned 50. He will celebrate the milestone with his family, have a sauna evening with his friends and then later climb aboard a cruise ship to Tallinn.

"I could live on a cruise ship. Cruise ships that sail to Sweden are a wonderful invention," Pääkkönen claims.

He goes on a cruise four or five times a year. Not that he likes the sea at all.

"I don't like to be out on the deck, but inside the boat. That's where you find everything. Just sitting in one of the ship's corridors is wonderful."

Once he gets to Tallinn, Pääkkönen will drop into a casino but the voyage on the ship is what it is all about.

But harbours and a casino in Tallinn are still far ahead, while we are sitting in a café next to the escalators down to the Kaisaniemi metro platform. Sitting with his rucksack by his feet, Pääkkönen has come straight from the National Theatre where he is rehearsing a new play, Europaeus by Juha Hurme, in which Pääkkönen plays Elias Lönnrot, the compiler of the Finnish epic Kalevala, amongst other roles. The premiere of the play is at the end of the month.

"It's been such brilliant fun to be rehearsing," says Pääkkönen, sipping his coffee.

During his almost 30 years with the National Theatre, Pääkkönen has appeared in around 60 plays, including Kristian Smeds' Tuntematon Sotilas (The Unknown Soldier), Paavo Westerberg's Valhe (The Lie) and Kaisa Korhonen's Vuosisadan rakkaustarina (The Love Story of the Century), which is still currently running.

Pääkkönen demonstrates a down-to-earth manner when discussing his work, shunning the limelight. Does he approach theatre with the attitude that it is work like any other?

"Work I'm glad to be doing. I might not have played the biggest roles in the history, but I'm over the moon with how I've been able to affect people."

Pääkkönen recollects an anecdote from a trip the National Theater's actors made to Berlin in 2012.

They had already been to see some shows, at the famous Volksbühne theatre and before the journey back, Pääkkönen wanted to buy Legos as a present for his children. Unable to find the toys he was after, Pääkkönen decided to while away the time in a casino nearby. All of a sudden, lights were flashing and bells ringing: Pääkkönen had hit the jackpot in a fruit machine, winning 7,000 euro.

"Something like that only happens in films. I was shaking while walking back to the hotel. In the hotel lobby, I bumped into the actor Jukka-Pekka Palo, who asked if something was the matter. I bought everyone a round of champagne."

Not a Mickey Mouse gig

Pääkkönen is a theatre actor, whose face has not become familiar in numerous films or TV series, even though he has appeared in both. He is one of the most talented and often used voice actors in Finland, whose voice has been heard in adverts and games as well as in dozens of films and thousands of episodes of various TV series. He has done voice-overs for such major animations as Ice Age, Madagascar and Toy Story, and for the children's programmes Richard Scarry's Busytown and The Octonauts.

In the Angry Birds animations, Pääkkönen has lent his voice both to the birds and the pigs.

But his longest running, and perhaps the best-known, voice acting role has been to play Mickey Mouse. Pääkkönen just finished recording new episodes for the television series Mickey Mouse Clubhouse.

In 1999, Disney gave Pääkkönen the green light to step into the shoes of the popular cartoon character. There are strict guidelines on what the character must sound like – perhaps because Walt Disney himself gave his voice to Mickey. When acting the role, a male actor must speak in a falsetto without overdoing it or breaking into a squeak. Mickey Mouse also has a characteristic laugh and uses certain phrases. Pääkkönen says that doing the voice for Mickey is a physically strenuous performance.

"I can only manage it for two hours. The volume is loud and I have to use high pressure to produce the sound."

Outside the recording studio, Pääkkönen steers clear of Mickey Mouse impressions. "A couple of times I have used Mickey's voice to coax the children into eating their porridge. But I try not to do it or I'll soon be stuck with reading bedtime stories as Mickey Mouse."

Along the years, Pääkkönen has started to identify with Mickey's character to some extent.

"Even though Mickey can be so irritatingly chirpy."

In the United States, Wayne Allwine played Mickey Mouse's role for more than three decades but Pääkkönen does not want to speculate how long his stint as the world's most famous mouse will continue.

"A lot depends on the changes to my larynx. At some point, I might not be able to hit the high notes in songs."