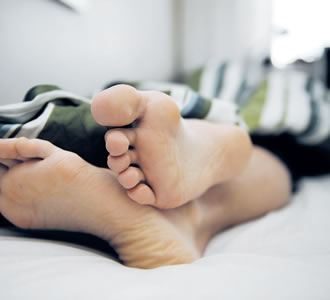 A study has looked into the different dreams experienced by men and women.

Do women dream differently than men? Researchers from the University of Montreal plunged into the gendered unconscious in a new study forthcoming from the journal Sleep: www.bit.ly/1fpbqTK.

Their focus: nightmares, defined as dreams intense and disturbing enough to wake you up. (An unpleasant reverie that doesn't rouse you is simply a bad dream.) The study uncovered a trove of captivating facts about nightmares in general — that they prove "more bizarre" and "less rational" than regular dreams, that they don't necessarily provoke fear. (About one-third of these nocturnal ordeals instead breed sadness, confusion, guilt or disgust.) But of special interest to me was the discovery that nightmare themes often vary by gender.

Researchers Geneviève Robert and Antonio Zadra collected nearly 10,000 dream reports from 572 men and women during two to five weeks. Previous questionnaire-based studies had relied on foggy memories of preset motifs ("Sure, I think I've dreamed about falling?") — but in this one, participants recorded their dreams immediately after they woke up in the morning. Of the 9,796 reports, 253 qualified as nightmares. Analysing themes and emotional content, the researchers found that men were more likely to report having nightmares about natural disasters (floods, earthquakes, fires volcanoes), chase or pursuit, and insects. Women's nightmare records more often featured interpersonal conflicts, such as an argument with a spouse and more frequently involved feelings of humiliation, frustration or inadequacy.

Why might this be? My first thought was that, while women may not mind admitting to researchers that an ex-boyfriend still haunts them, men were only reporting the more cataclysmic plots. (Tsunami!) On the other hand, "dream content is tied into waking concerns," Zadra explained over the phone. "For women, on average, social or interpersonal dimensions may be more emotionally salient." As Zadra points out, an interpersonal focus also shows up in women's erotic reveries. Whereas men often dream of sexual partners who don't exist in real life, female sleepers are likelier to fantasise about specific acquaintances: spouses, former flames, co-workers, friends.

Plus, "nightmares rarely start off as nightmares," Zadra says. "Usually they begin in a mundane, neutral fashion." Before the killer clown arrives or the relative falls ill, he continues, women's nightmares often contain instances of friendliness. And when the sleeper is a woman, even a nightmare in full swing will frequently include a helping character. (Not so for men, who tend to navigate their dystopian dreamscapes alone.)

Though the occasional nightmare is a universal experience (as is the friend who recounts that nightmare for two hours over brunch), the study finds that harrowing dreams occur far more frequently in women than in men. This could be because women have better dream recall as a rule, says Zadra, or it could reflect that the conditions that give rise to nightmares — anxiety, depression — are more prevalent in women than in men. (Or — let's not forget this one — men could just be reporting fewer scary night trips, because they are tough guys who spend their REM cycles not being scared, nope, not at all.)

The explanation for the gender nightmare gap may lie buried somewhere in the 572 dream journals, which now slumber in a "dream repository" within the University of Montreal's Department of Psychology. I see the journals sorted into boxes and guarded by a reptile-headed security guard who may or may not be wearing a coat, and the walls are made of orange Popsicles, and then all my teeth fall out.