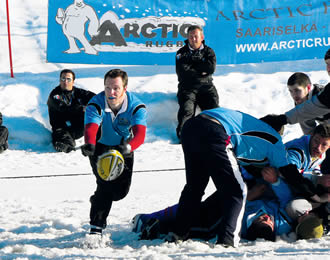 Rugby has arrived up north in a big way.

The original “Arctic Rugby” was the brainchild of Australian expat, local businessman and Aussiebar co-owner, Scott Fraser way back in 2003. Scott originally became involved with Finnish Rugby at the turn of the millennium and after being driven to expand the reputation of the sport in Finland, decided that it was time to push the limits and do something that had never been done before.

The concept soon evolved into an event that would not only promote and give recognition to the game of rugby in Finland, but start to put Finland and Arctic Rugby on the map of international Rugby Federations worldwide.

What soon followed was the birth of an extreme, innovative and unique international event, which captured the interest of media and rugby fans across the world. Arctic Rugby was to become the first and only rugby tournament played on a snow pitch 250km north of the Arctic Circle.

The tournament was endorsed by FRF/SRL (Finnish Rugby Federation/Suomen Rugby Liitto) and events were planned and organised by committee members along with the help of the Helsinki Warriors Rugby Club. Administrative contacts helped to secure a venue, 250 kilometres north of the Arctic Circle, in the town of Saariselkä, the northern most ski resort in the European Union.

As well as the Finns, participants included teams from all over Europe including Italy, Ireland and even the Canary Islands, as well as French, British, Australian, and New Zealand expat teams. According to statistics, the event was avidly followed by over 250 million viewers worldwide. The event also attracted press coverage from all over the world including IRB’s Total Rugby, Transworld Sport, BBC Sport, English Rugby Magazine, Australia’s Inside Rugby Journal as well as other websites, newspapers and radio stations from around the world.

“I was very proud of what we accomplished and also that the tournament ran successfully for six consecutive years, from the inaugural event in 2004 through to 2009,” Fraser states. “During the six years the tournament was held, it was able to keep to its motto of Rugby on Top of the World, and by means of venue, format, media and activities we were able to create a fun, unique, extreme, innovative, international tournament. Now the time has come for Arctic Rugby to be reborn and carry on its legacy.”

In 2010 the tournament was put on hold until AussieBar International, who have also supported the growth and development of Finnish Rugby since their foundation in June 2006, took over management of the event from Scott. The bar immediately became involved in the avid support of Finnish Rugby and have set about re-structuring and planning what promises to be an even bigger, more successful tournament in 2014.

“Already being a major sponsor of both the Finnish International Rugby Team, as well as the sport in general here in Finland, it just seemed like a great idea to get involved” explains co-event coordinator and Managing Director of AussieBar Turku, Isaac Visser.

Rugby on top of the world

This year, Aussie Bar have partnered up with sponsors such as Hotel Levi Panorama, Levi Tourism and Haaga-Helia University of Applied Sciences and plan on putting on the greatest event in the history of Arctic Rugby. “We hope to see up to 30 teams playing side by side on two fields, within the next couple of years,” states Visser, while adding that they also hope to see teams from all across Europe participate in the rejuvenation of this unique sporting event.

The game will be played according to Rugby sevens rules “This allows for a faster, higher scoring, more action packed spectator event,” Visser explains.