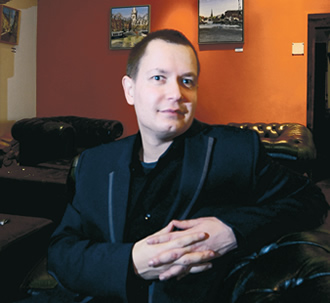 A Finnish polymath set himself the task of unravelling the most common mistakes and grey areas plaguing the most widely spoken language in the world, just to make your English better.

IT’S USUALLY at nonchalant places such as bars where – after a long period of maturation and a couple of pints – ideas and dreams are let loose to run aloof.

This is also where Jesse Karjalainen, 38, with the encouragement of his girlfriend, decided to go with his well incubated idea of writing a book about the most common mistakes made by native and fluent English speakers. Now, many may be raising their brows: a Finnish guy has written a book about the mistakes English speakers make in their mother tongue? That doesn’t sound right!

Jesse is not your typical Finn, however. Born in Sweden, brought up in Australia and university educated in the UK, cosmopolite Jesse considers English to be his mother tongue and Swedish his second, leaving Finnish in third place. “These days I speak in English with my Mum and Swedish when we want to keep matters to ourselves!” he reveals.

Currently working as an editor, designer and producer in a publishing company in the UK, Jesse is a journalist by education and also works as a professional photographer. He also works for Helsinki Times and has worked for the Swedish-language newspaper Hufvudstadsbladet.

An editor by day and a writer by night, Jesse worked on building up his book for 13 months. “The funny thing is, the day I decided to write the book, I took a week off work, and thought I could write it in a week!” After three full drafts and copious feedback from family and friends – and a long ban from the Playstation and the TV – the book, The Joy of English – 100 conversations about the English language, was ready.

So what was it that made him write a book about these most common mistakes in the first place? “Basically, I’m an editor: I edit people’s work every day, and I have a boss who’s training me, telling me what’s good and what’s bad. I get to pick up things in a professional way. The spark came from the fact that the same things would come up over and over again,” Jesse explains. He sees English language being crammed with old wives’ tales, raising debate in and outside the office. “If someone at the BBC says ‘an hotel’ many may think ‘oh, I didn’t realise that was the right form,’ spreading the misconception further.”

Another reason for doing the book was that on opening a typical grammar book people are often overwhelmed by the utter boredom that it induces, being consequently put off by the whole subject. “This is why I thought that it was important to write a book that is both accessible and fun to read,” also considering the fact that he hadn’t seen other such books on the market. “I just thought that, hey, I would’ve loved to have known these when working!” The book may come in handy not only to people working in journalism, communication and publishing, but also to university students or anyone who has to write any-
thing in English for their work.

Jesse admits it does sound quite funny. “Finland’s newest writer has written a book about English in English for the English about how to speak better English,” he says, chuckling.