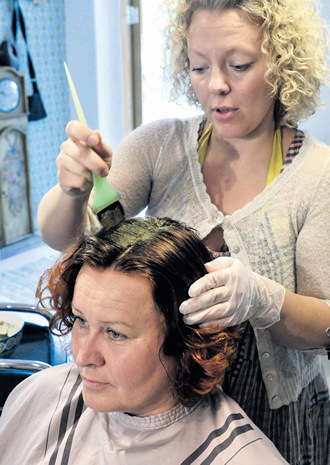 Eco-hairdressers have grown in popularity over the last few years. According to barber and hairdresser Kirsi Kokko-Ndu, you can achieve a lasting result with plant-based dyes and they can even be used to colour greys. Heavy bleaching is still impossible with plant-based colours, she says, although gold tones can be added. Plant-based dyes cannot be used for cool tones either. The end result, after all, is a natural colour.

Plant-based dyes are generally also suitable for people who are allergic to artificial hair dye, unless they have an allergy to a specific plant.

“I have not heard of anyone having an allergic reaction to plant-based dyes,” Kokko-Ndu says.

She brushes green goo onto customer Sari Kuohukoski’s head. The mixture is made up of pinecones, rosemary, hibiscus and avocado seed. The most important dyeing ingredients in plant-based dyes are henna, indigo and cassia.

“The end result is wonderful. The colours condition the hair. I am completely addicted to it,” Kuohukoski says.

She coloured her hair for years using conventional hair dyes, until her scalp became irritated and developed sores. After she discovered plant-based dyes, she did not have to stop dyeing her hair completely.

Nearly all of the colouring ingredients that Kokko-Ndu uses are organic, except for those she collects in the forest herself. These include, for example, pinecones.

Kokko-Ndu was certain she would become an eco-hairdresser even in school. She got a reaction in her cheeks from the chemical colours she used while studying, and even as a teenager she was interested in making dye herself.