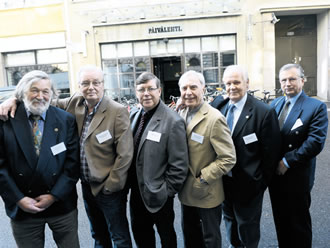 Leaf through the history pages of Finland’s leading newspaper.

PÄIVÄLEHTI Museum is located on Ludviginkatu in the old building of the Päivälehti newspaper. The premises served as the office of Helsingin Sanomat untill 1977. The museum’s main exhibition, Time of the News, describes the history of Finnish journalism and of Helsingin Sanomat, as well as printing techniques from the late 19th century to the present day.

In 1889, Päivälehti, the predecessor of Helsingin Sanomat, was launched by Juhani Aho, Ero Erkko and Arvid Järnefelt, three young radicals who wanted to foster democratic and liberal development in Finland. In the summer of 1904, the censorship exercised by Russian authorities resulted in the repression of Päivälehti, and the dismissal and exile from Finland of its editor-in-chief, Ero Erkko.

In 1904 Helsingin Sanomat was established as the organ of the Liberal Progressive Party to continue the work of Päivalehti. Helsingin Sanomat gained success by renewing its content in the 1920s and 1930s when the new editor-in-chief Eljas Erkko – son of Ero – manged to combine market needs and the newspaper’s development into a profitable business.

During the Second World War, censors and material shortages had an impact on the content and the appearance of the newspaper. After the war, Helsingin Sanomat, as a politically independent newspaper, had a quarter of a million subscribers and by 1955, was the largest newspaper in the Nordic countries.

As a result of the changes implemented by the new editors-in-chief Aatos Erkko and Teo Mertanen in the 1960s, the newspapr turned towards a more modern and pluralistic trend, while automatic data processing made production more efficient. From the 1990s onwards, Finns have become one of the leading nations in newpaper readership.

In the printing cellar, the exhibition houses the equipment and methods from the letterpress era. The printing cellar is also where the demonstrations of techniques related to layout, printing, manual and mechanical composition take place. The muesum also organises free of charge guided workshops.