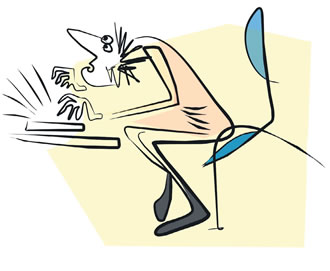 When working life grinds down your motivation and even vacations don’t help, it might be time for a change of pace.

“THE TROUBLE with the rat race is that even if you win it, you’re still a rat.” Lily Tomlin’s words may resonate now more than ever, as people face longer hours on the job with fewer rewards. The understanding used to be that one would work hard and play hard: the harsh toll of a career would be compensated with an ever-increasing standard of living. That particular equation has broken down, as corporate practices, financial crises, recessions, higher costs of living and a host of other factors have eroded the link between work and fulfilment.

Enter downshifting, a concept that is gaining traction amongst the working population. At the simplest level, it involves changing the terms of the equation: working less and consuming less. Just as with shifting down a gear when driving, though, it isn’t just about slowing down – it’s about becoming more efficient, more nimble, and possibly changing direction.

Going all the way

True downshifting doesn’t rely only on reducing hours and budgets. It also requires a change in mindset, lifestyle and consumption patterns. For the most radical, this means moving to a different location, usually in the countryside, and becoming as self-sufficient as one’s skills and abilities allow, which can extend even to growing one’s own food, or taking up traditional crafts like weaving and pottery.

Such a level of downshifting is obviously not for everyone, and most practitioners do not go anywhere as far as that. For the majority, taking fewer hours at work, refusing overtime, and forgoing the latest iDevice is enough of a change to begin with.

The benefits are many: more time and energy to devote to one’s family, friends, hobbies and self; the satisfaction of gaining a new perspective on life; a greater connection to the more important things in life, and in the world; and in concrete terms, a smaller ecological burden on the environment.

No bed of roses

Of course, there are challenges to be overcome. In an increasingly competitive labour market, it can be career suicide to be seen working less than one’s colleagues. It can be psychologically difficult to give up the comforts of retail therapy, or to see one’s children having to make do with hand-me-downs when schoolmates are flashing their latest acquisitions. In a society that values an industrious work ethic, it can be seen as lazy. It has even been suggested, by people such as entrepreneur Jari Sa-
rasvuo, that downshifters are selfish because society needs taxpayers.

Downshifting isn’t all sweetness and light, but with a clear idea of its costs and benefits, it can be a life-changing experience. Hilma Ruokolainen certainly believes so, after taking a seven-month break after eight years of non-stop work.

“Although there was nothing badly wrong with my work, I just wasn’t very enthusiastic about it. Basically it felt like being at school but doing the same school year over and over again,” she says. “I was demotivated, tired and even a little desperate sometimes.” She originally planned to study during her time away from work, but soon realised that she was too tired: “It is only then that I admitted to myself that I actually just needed to rest and recover from all the busy years.”

Ruokolainen was fortunate in that her employers did not present any obstacle to her plans. In fact, she is now back working with them again. She still faces the same deadlines and obstacles, but, as she says, “they just don’t bother me so much anymore.”

As for those who claim that downshifting is selfish, she has this to say: “I think working like a maniac is much more selfish than downshifting! Downshifters take care of their kids, often volunteer in their local community and make sustainable choices in their everyday life. Maybe they pay fewer taxes but in the long run their way of life is less expensive for society. I see it as preventive action for the good of the public health and the globe!”

So if it’s all getting too much for you, perhaps it’s time to think about dropping the revs and setting yourself on a new course in life. It might be a big step but there’s everything to gain.