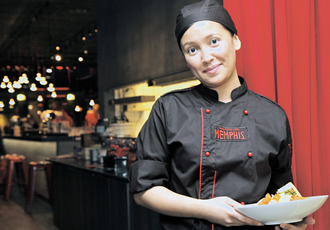 To get a job in Finland, Filipino cooks have to undergo months of training.

SOMETIME in October a customer will sit down in a Helsinki restaurant and begin enjoying a good meal. Little will he know that the preparation of that meal began months earlier on the other side of the world, when a Filipino cook answered an advertisement looking for help in understaffed Finnish restaurants.

Marjo Miinalainen heads the Opteam operations in Manila. She has a long history of working internationally, including stints in Switzerland and on foreign cruise lines. She took up her present position in 2009, managing the office and overseeing the local partners. Due to Filipino law much of the recruitment work must be outsourced to local firms.

“Overseas recruitment is big business in the Philippines,” she says. “Filipinos working abroad remit money equal to 18 per cent of the country’s gross domestic product. Almost every family has a desire that at least one child goes abroad. This guarantees the family income, because the Philippines have a quite high level of unemployment and when they look to the future they see that they may never get a job. So, recruitment abroad is considered ethically positive. Of course, all companies have different policies, but when they do the right thing, yes, it is considered good.

She explains that many only work abroad temporarily, staying for some years and then returning home. However, many Filipino workers plan on staying abroad permanently. This is especially likely for those working in North America. At some point they bring their families with them to stay in Canada or the United States.

Local companies that have been hired to recruit workers do the majority of the work, although they are overseen by Opteam. Recruitment is primarily done by word of mouth, as Mii-
nalainen points out that the “grapevine” works surprisingly well in the Philippines. Printed and online advertisements are also used, to some extent. 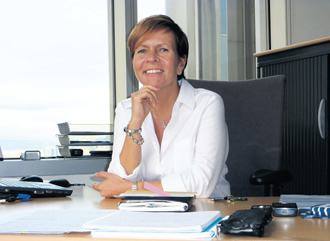 It is a major endeavour to hire workers abroad and bring them to Finland. Miinalainen says that it can take many months to find suitable candidates and train them in the Finnish language.

“Chefs receive two months of language training before heading to Finland,” states Miinalainen. “A two-month immersion in the language is surprisingly useful. We have good teaching methods and a good teacher. Based upon their feedback, it has been easier for the chefs at work and in society due to their language skills. Although the majority of the workers in the Finnish hospitality industry speak English, Finnish certainly helps.”

Finland is a very popular destination for the Filipinos, so the Opteams Philippine partner gets many applications. It is a long process to recruit the workers for an understaffed industry, but the Filipinos are patient. As many Finnish companies are desperate for qualified staff, they are willing to go through the extra trouble to recruit labour.

“The recruitment process is long, and then there is the language training,” Miinalainen explains. “Recruitment is not done by just snapping your fingers. Also, the bureaucratic paperwork is demanding. There is a clear indication that the labour shortage is so great that employers are willing to invest both time and money to bring foreign workers into Finland.”

Nikki Enriquez came to Finland two years ago in a group of about thirteen cooks. She studied Finnish for months prior to her arrival, and after she started working in Finland she still had another year’s worth of classes to attend.

“Opteam has helped so much,” Enriquez says. “They did practically everything for us. They helped with all the paperwork and told us where to go to get things done. It is so great that they are helping people in my country find a job.

Enriquez says that there are 48 Filipinos in her group at present. She works at the Memphis restaurant and enthuses about how much she enjoys it.

She says that she misses home, but that is usual. The biggest problem she had to worry about is the Finnish weather, but even that wasn’t too bad.

“My first winter here in Finland was the first time I saw snow. I was so excited that I never thought of the cold. The snow brings out the child in me, and every time I see it I think of Christmas.”