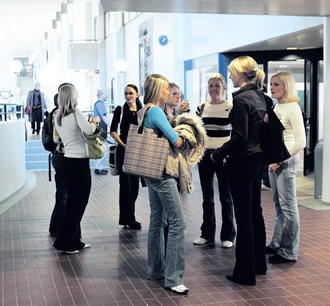 THE Finnish education system has acquired a strong international reputation for quality. There are currently 15,700 international students enrolled here in Finland, a number that is divided almost equally between university and polytechnic institutions. However, this constitutes just four per cent of the students nationwide. More worryingly, 70 per cent of all non-Finnish graduates are leaving the country upon the completion of their degree, which begs the question: is Finland merely preparing students – for free – in order for them to benefit other countries and economies?

Minister of Education Jukka Gustafsson recently declared that the ministry is seeking an increase to 20,000 international students by 2015, but the majority of those students will take their skills elsewhere upon graduation unless steps are taken to stem the flow.

Networking is a very important tool for obtaining employment. Although companies regularly recruit students even before they graduate, international students still find it difficult to establish contacts in their industry.

“A lack of networks can be a barrier to finding entry-level work,” offers Chris Pape-Mustonen. “The issue of networking is certainly something you are warned about... However, those foreign students who do have problems establishing a network can be at a serious disadvantage to Finns who are born with such an advantage.”

According to Paul Ilsley, of the University of Helsinki, the problem is that many international students do not graduate in the first place. A much higher percentage drop out of their courses than native students, and this is in part due to the poor care they get from their faculty.

Indeed, some students have been known to wait up to two years before seeing an adviser. “I have known colleagues joke about this situation and they do nothing to help the international students; it is systematic social inequality and accentuates the spectre of Finnishness for the sake of Finnishness,” Ilsley says.

The difficulty of learning the local language has previously been well documented, and continues to be extremely influential in discouraging many graduates to remain in Finland.

“The complaint is that international students do not learn Finnish, but the reality is that the chances of them doing so are remote,” explains Ilsley. “In my experience, there is only one class available. This is very poor. Furthermore, it is a vicious circle: the belief amongst the academic staff is that if they can’t help themselves then why should we help them? Only if they learn Finnish can they then help themselves, but there is no desire to offer them that chance.”

“Employers are unaware that we have such a huge academic talent here in Finland,” explains Heidi Layne, a specialist in career guidance and training at VALOA. “The main challenge for international students to find employment is the lack of networks... language does play a role, but the employers we have talked with have started to think about the language requirements by position.”

“There are a lot of people who have a lot of resources, knowledge and the willingness to work on this,” Layne says. “[If companies] would see the benefits and resources of international graduates, it would boost their own economies. What is very positive now is that there is a true interest. The discussion is moving from just talking and writing about it to actually thinking what would be the model that could be created here.”