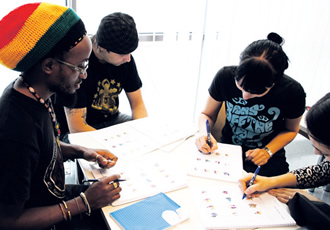 LEARNING Finnish is every foreigner’s nightmare. Speaking from personal experience, there is a real desire to learn the language upon arrival in the country, mainly due to the excitement of arriving in a new country and the eagerness to fit into a new society and adapt – not to mention excel.

However, while courses are often aimed at new arrivals, what about those who are lucky enough to find gainful employment immediately or who already have a job organised before they arrive? Why is it that only the unemployed should benefit from affordable tuition, while those in work are forced to seek expensive classes that are often at unsuitable times? Indeed, the Finnish government doesn’t even financially support Finnish classes for non-natives in employment, while those without a job are offered a real long-term advantage.

The Ministry of the Interior understands the goal of integration policy to be the enabling of immigrants to participate in Finnish society, and according to the ministry the learning of Finnish or Swedish is an integral element of this process. The ministry’s explicit goal is for immigrants of working age to enter working life and for their knowledge and expertise to be put to use in Finnish society.

Only if you’re unemployed

Jerome Jouanno is a French national who moved to Finland two years ago and found work almost immediately, albeit in a field that was not overly familiar to him. His experience of Finnish resonates with that of many others. Jerome is currently Coordinator of Operations at Earth Aid Finland, which is a post-disaster reconstruction and project management company; it is a job that requires him to speak at least conversational Finnish. However, when he left his initial job and applied for government-run Finnish classes, he was left stunned by the outcome. “It was only when I left my job that I became eligible for Finnish classes. Having gone through all the tests and paperwork, I was told that I no longer qualified for the class, as I had set up my own business two days previously.”

The reason the government offers the courses purely to those without work is that unemployment subsidies are given to those who take part, meaning anyone with a job cannot receive such benefits. On top of this, the courses run throughout the day for up to five hours, a factor which also discounts those who work or are full-time parents.

So, are those in jobs really penalised when it come to learning the language? On the one hand, the answer is no. The government-run classes are offered at such a low cost because the people who take part have no job and are therefore unlikely to be able to pay for tuition. Conversely, if you have a job, it is presumed that you can afford your own classes. However, when you look into taking classes of your own, the choices are limited and often unsuitable for those who are in employment. One excellent course is offered by the Summer University, who run, as the name suggests, courses throughout the summer. But, once again there are problems: the courses run for four hours a day, three days a week, thereby ruling out anyone who cannot take an entire month off during the summer.

However, there are people trying to make a difference. Sari Pöyhönen, a senior researcher at the University of Jyväskylä, has spent a great deal of time researching this subject and working towards a solution. She believes that there is not enough flexibility in the system but that it is getting better.

“This is an issue that has been neglected and there is not enough help out there for people who have work or are full-time parents. However, projects such as the ministry-run ‘Osallisena Suomessa’ are offering opportunities such as evening classes and affordable education.”

Osallisena Suomessa is one of the largest projects targeted at enhancing the integration of immigrants, says the Ministry of the Interior. The project is designed to develop a new model of integration.

Pöyhönen also believes recently-passed legislation that gives everyone the possibility to learn both English and Swedish will have a positive knock-on effect; however, the question of funding will inevitably lead to problems and the curtailing of even the most passionate projects. Furthermore, there is an onus on employers to assist workers when it comes to their study of the language.

“Workplaces are now helping employees with classes,” says Pöyhönen. “There is a slow realisation that if your staff feel integrated and safe in the country, they will be happier and more productive in everything that they do.”

While Finns and their government can be legitimately accused of being stuck in their ways, foreigners are also guilty of relying on the superb English skills of the Finnish population. Some Finns become annoyed when no effort is made to learn at least the basics of the language, but they may also lack awareness of the efforts being made by immigrants, nor realise that learning a language as alien as Finnish, while also juggling a career and family life, can be very difficult.

So it would seem that your best chance of learning the language, and thereby creating the optimal conditions for your integration into Finnish society in the long run, is to have at least one prolonged period of unemployment. This perverse situation must be remedied in order to meet the needs of Finland’s varied immigrants.