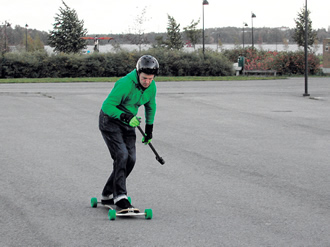 It’s a long way from Hawaii to Helsinki, but this summer someone managed to link the two with what looks like a surfboard pushed by the rider from a standing position with a pole. This at least turned my head as he shot past me in Hakaniemi. Jukka Vallisto’s skateboard came closer to turning my ankle when I encountered him at twilight near Arabianranta.

A relatively recent convert to skateboards, Vallisto has found a rewarding way to shorten his commuting time by using an adapted longboard, propelled by a single two-metre pole for “land paddling”. Like his distant single-pole skiing forebears, he uses the pole for extra propulsion, for occasional emergency braking and (so far unrequired) as defence against attacks from outraged trick-skateboarders. “It adds variety and more upper body effort compared with constant kicking with a regular longboard,” he explains.

Originating from Hawaii, the equipment was not initially available in Finland, forcing Vallisto to sculpt his own power stick, adding a rubber “foot” to the pole for a interface with the road surface.

“It’s essential to be well protected,” he adds, his wrists shielded by those reinforced cuffs common at the height of the roller-blading craze a decade or so ago. Head, knees and elbows have their protection too, meaning that Vallisto has had no serious accidents. In fact, the greatest threat to this new style at this time of year are the wet leaves that collect on the pavements, which wreak havoc on the grip of the board’s small wheels.

One-pole skiing was the way to go in prehistoric times, at least until the mid-19th century. In 1985, Olympic skier Gunde Svan tried to reintroduce the style to competitive skiing. For the meantime though, this strangely anachronistic adaption is certainly a minority style of boarding. It doesn’t yet threaten the ever-increasingly congested cyclepaths of the city.