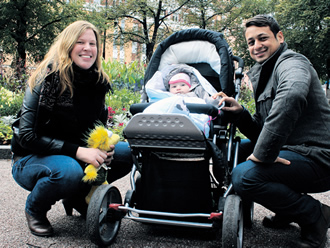 I think of Kallio as the belly button of Helsinki. There is access to other neighbourhoods by tram and metro, but you can also bike and walk pretty much everywhere in the downtown core. If you don’t want to venture far away from home, there are plenty of parks to relax in and you can even bring your cat if you fancy!

Kallio is also relaxed, ‘liberal’, and bohemian. The streets have plenty of different characters who don’t conform to any societal expectations. Kallio people have access to cheap beer in the local bars, ethnic food in the local shops, and a marketplace that provides traditional Finnish food. It makes it easier for the residents to feel like they are part of a diverse, international city.

What is special about your neighbourhood?

Kallio is one of the most densely populated areas in Finland. The neighbourhood is separated from the city centre by the Siltasaarensalmi strait. There is a bridge that connects both areas called Pitkäsilta (‘long bridge’), which traditionally has been the symbolic divide between the bourgeois centre and the more working- class area around Kallio.

Kallio used to be inhabited mostly by factory workers and their families as well as students and artists. Over the last few years, it has been somewhat gentrified, increasing rent and pushing less wealthy locals out of the area.

What’s one shop or service in your neighbourhood that you would like to recommend?

The Bear Park café in the summer! There is a beautiful atmosphere and you really feel like you are in the heart of the city. It is heavenly, especially if the weather agrees with you!

What else would like HT readers to know about your neighbourhood?

President Tarja Halonen was born in Kallio and lived there until her election as president in 2000.