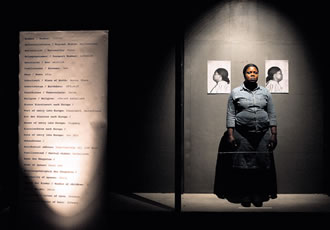 At the turn of the twentieth century, German military camps in the region were filled with Herero and Nama people. Brutalised by death marches, starvation, mass executions and forced labour, the local people were also subjected to pseudo-scientific research, in the hope of proving the racial inferiority of Africans.

The Dr Fischer of the title refers to Professor Eugen Fischer who developed some of these theories, the end result of which also saw native Africans being put on display in human zoos around Europe and the US. 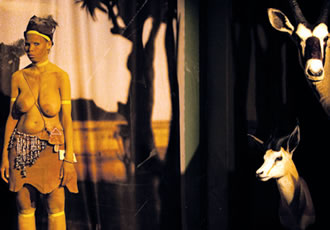 The exhibition hosts a number of clay-covered heads of the Nama people, placed on pedestals as they sing haunting hymns that address the genocide. Furthermore, framed black-and-white photographs depicting decapitated heads from 1906 are on display.

The Exhibit A installation also includes a workshop for immigrants, with the results being incorporated into the Found Objects part of the installation.