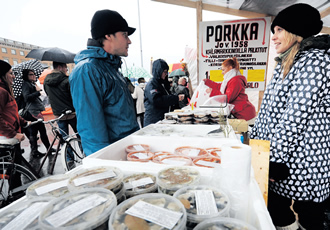 Events officially kick off at 11 am on Sunday when Lord Mayor Jussi Pajunen opens the market. The programme continues throughout the day, including the preparation of herring dishes on stage, a children’s programme and a performance from a brass band. Things culminate in the Herring product competitions award ceremony, with the award of the Best Marinated Fish and Herring Surprise of the Year awards.

A smaller cousin of the popular fish that is generally found off the shores of Britain and the East Coast of North America, the Baltic herring is Finland’s most prominent catch. Other popular items on sale during the week of fishy celebrations at the Market Square include dark bread from the Turku archipelago and clothing knitted from the sheep who graze on the islands in the archipelago region.