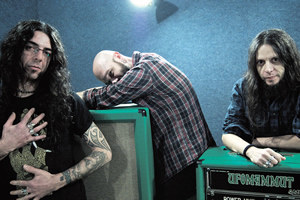 FANCY a spot of outer-space psychedelia accompanied by a swag of monolithic, monumental riffs? Well, lucky for you, because the Italian outfit UFOmammut is returning to these shores, bringing fellow Italians MoRkObOt along with them for the ride for a gig at Korjaamo Culture Factory on Saturday 24 September.

Taking their name from Unidentified Flying Object and the Italian word for mammoth, the group is made up of Poia (guitar, synths and effects), Urlo (bass, synths, effects and vocals) and Vita (drums). Releasing their first album Godlike Snake in 2000, they followed on with their animal theme in 2004 with Snailking. With a further two full-length albums released thereafter, the trio has since become renowned for their thunderous riffs, hinged on sludging, chugging and wailing guitars that blend shades of Kyuss and Pink Floyd.

Along with haunting screamed vocals, the memorable UFOmammut live show experience is cemented by the visual accompaniment provided by video and graphic art studio Malleus, a rock artist collective.

Putting the finishing touches on their new record, this Helsinki gig is the final night of a Finnish tour that will have seen UFOmammut performing in four different cities here over four nights.