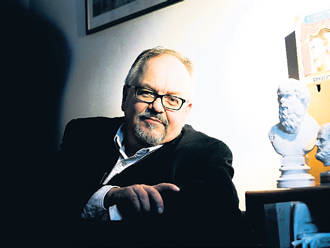 Psychiatrist Antti S. Mattila holds an office advising on philosophy. He believes that all too often, people with depression are given medicine, when what they need is a change in lifestyle.

One will not find the office of philosophy unless one knows what one is looking for. The name written by the door is simply Mattila.

A few stories up the apartment building is a small room that only barely fits an armchair in its corner, a couch and a small table.

“The most shocking situation is when a client asks a psychiatrist what the point of life is, and the psychiatrist responds by increasing the dosage of medication. This really happens,” says the man sitting in the armchair.

He is Antti S. Mattila, a doctor of medicine, and a specialist in child psychiatry and psychotherapy. He has an office at a private medical centre. In addition to that he runs a child psychiatry centre for children who suffer from serious neuropsychiatric problems.

But Mattila also has another passion and profession.

In his small room he discusses with his clients questions that have elsewhere been left unanswered. Is it time to change career? How does one recover from a divorce? Is it possible to be happy in your day-to-day life, when someone close to you has passed away? And – what exactly is a good life?

“Many people who come in to my office are amidst a mid-life crisis, even though it doesn’t hit exactly at that mid-life point. They don’t see themselves as needing a psychiatrist, and looking for spiritual guidance won’t help either if they’re not religious.”

Mattila believes that in that situation, answers can be found from ancient philosophers. In particular, the Stoics who stressed the conservation of equanimity.

When one looks at online bookstore Amazon’s list of bestsellers, it is easy to draw a conclusion: a boom in life skills.The Life-Changing Magic of Tidying Up.

10% Happier: How I Tamed the Voice in my Head, Reduced Stress Without Losing My Edge, and Found Self-Help That Actually Works.

The current topic of many books is, in one way or another, how to lead a good life.

The same phenomenon is in question when a Finnish office worker constructs a map of dreams from magazine cut-outs. Or when that individual proceeds to become a life coach and nobody even wonders what that means.

“Decisions were driven by one’s family and parent’s wishes only 50 years ago. Now society’s network has relaxed, and there is much more freedom in decision making. People are in crisis.”

In Mattila’s own home, philosophical reflections were not a part of the discourse. One skill was above all others: business aware and having worked at the surveying department, his mother loved mathematics.

All of Mattila’s three older sisters became teachers of mathematics. The boy headed towards the medical field and specialised in psychiatry.

While writing his thesis, Mattila made a finding that revolutionised his world. Sitting uncertainly in the background of many psychiatric problems appeared to be an unresolved philosophical question, an existential crisis. The biology-oriented medical perspective regarding mental health began to look too narrow.

Now Mattila is certain of it.

“For many, depression is a time of philosophical thought where one rethinks the direction of ones own life. The system devised to treat depression, however, takes the attitude that symptoms should quickly be removed, something preferably done though the use of medicine. That leaves important changes in life undone.”

And if nothing changes, how could one ever find the courage to stop taking the medication.

“That can be one reason why depression becomes chronic and medicine is used so widely.”

Mattila founded his office of philosophical advice in 1999. The concept was borrowed from Germany, since it was a new idea in Finland.

At his office Mattila tries to, through the questions he asks, “wake the inner philosophy of the client”. He aims to strengthen the so called practical wisdom: knowledge about one’s own decisions, the ability to weigh one’s own values and an understanding about what a good life could be like.

“Some of the more ancient philosophers said you can’t use philosophy for this. They said that the aim of philosophy is only to find something universally new. I think that something new can also be sought after in the life of an individual.”

Ten years ago, Mattila stood with his son Kalle at the counter of a coffee shop in Espoo. In the crowded opening of the new shopping centre it was hot, and the situation wasn’t helped by the fact that the cashier was working as if a character in a film played in slow motion, fumbling and losing items.

Already pained, Mattila began to wonder if the drinks would ever be made.

The perceptive young boy noticed that his dad was starting to feel discontented.

“Don’t get frustrated. Someone close to them might have died!”

The boy’s remark still makes Mattila smile. They had been discussing philosophical questions about seeing things from a different perspective.

Happiness in the perception of the beholder

Happiness is Mattila’s speciality. He believes that most people can achieve it if they can adopt a simple method. It is called the ability to change perspective, and it originates from Stoic philosopher Epictetus.

The famous principle articulated by Epictetus is that people are not shocked by things, but by their belief in them.

And when one forces oneself to consider an uncomfortable situation from a different perspective, it often begins to look more tolerable and unobtrusive. Such as the way that Kalle did at the coffee shop counter, when he considered that the clumsy cashier may have had a worse day than any one standing in line that day.

“Finnish people have adopted the ability well when they say, in the midst of difficulties, that what doesn’t kill you makes you stronger.”

Despite high levels of depression, Finns are a surprisingly happy people. We are the world’s seventh happiest, or Europe’s fourth happiest depending on if we trust the UN’s report on happiness or a European societal study.

Yet there are still things to learn.

“It is clear in, for example, the prejudiced attitude towards immigrants. If we knew how to change our perspective, solidarity and helping others would increase and the dialogue would develop. A good life would be within reach of many more people.”

Finns aren’t in shape when it comes to forgiveness, either.

“We think that the wrongdoer gets away with it. Then we are at the discretion of bitterness for years.”

In his work, Mattila has realised that it is particularly difficult to forgive one’s own parents. Many think, in bitterness, that parents favour their siblings – maybe even loved them a little more. The row begins when the division of the inheritance is taking place, at the latest.

“Many people think that their father and mother should have been perfect. But nobody promised that! It’s an endless source of bitterness.”

Everyone should have the right to pursue a good life, says Mattila.

“But,” he adds quickly, “it is not the same as everyone’s right to happiness.”

As a psychiatrist at a family clinic, Mattila saw concretely what a misunderstanding can lead to. Couples are divorcing more and more easily, and parents of younger and younger children are seeking help from the clinic.

“People are having children at an older age, and are accustomed to the single life. They cannot accept that a baby requires attention around the clock. Then they want a divorce when the child is just a couple of months old,” says Mattila.

He wishes that parents would withstand a little longer, and would have the patience to last past the worst chaos.

“Continuous happiness is impossible, because the pursuit of a good life may demand pain and patience every now and then.”

That was also the message of Epictetus: “Happiness is not present in every moment.”