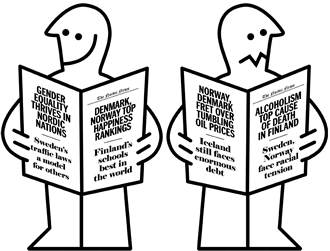 Northern European countries have recently enjoyed an upswing in positive perception in the United States. A British journalist takes a closer look at the phenomenon, and isn't as impressed as those living on the other side of the Atlantic Ocean.

"What's there not to love?" actor Will Ferrell enthuses in the second episode of NBC's expat-comedy Welcome to Sweden. "Picking blueberries, outhouses, a year off if you have a baby – even if you don't have a baby, just a year off. Your family around constantly. Lagom – not too much, not too little. I mean, they're doing it right over here."

Ferrell is in character, but his fervour is all too familiar. The United States is in the midst of an episode of Scandimania, brought on in part by the habitually high placing of Sweden and its similarly prosperous, egalitarian, collectivist neighbours – Denmark, Norway, Iceland and Finland – in global rankings of everything from happiness to lack of corruption, gender equality and consumption of organic root vegetables.

It is true, the old Viking tribes excel in many of these areas, but I fear, lately, we non-Scandis have become rather blinded by the Northern Lights.

Consider the glowing reports on Finnish schools (the best in the world, says Smithsonian Magazine, though the latest rankings show they are slipping), Norwegian prisons ("superior" claims the Atlantic – it helps that Norway barely has any criminals) and Swedish road safety (New York Mayor Bill de Blasio wants to borrow the model, though I suspect that speeding fines that rise with income wouldn't be popular in Manhattan). And there's the adulation of Nordic cuisine (is there a US publication that hasn't gone foraging with René Redzepi? Car and Driver, maybe).

The Washington Post is not immune to Scandinavia's charms, recently marvelling at how Danish branches of McDonald's manage to pay their employees 2.5 times US McDonald's workers' wages (clue: when about 75 per cent of earnings disappear as income and consumption taxes, higher wages are more necessity than choice).

The New York Times also seems to have a crush on the Nordics. "Joy Is Always in Season," it gushed in a piece on Denmark (the latest Gallup polls indicate that's less true than it once was), and last month the Times assured us that "A Big Safety Net and Strong Job Market Can Coexist. Just Ask Scandinavia." (*Cough* unemployment is 5.6 per cent in the United States, vs. 8.1 per cent in Sweden, 8.9 per cent in Finland and 6.4 per cent in Denmark.)

Somewhere in the middle

I live in Denmark, and although it appears to have been surpassed as the happiest country in the world by Panama, Costa Rica or Fiji (depending on which list you believe), it is still a pretty great country, especially in which to raise kids. But Scandinavia is not the utopia that American liberals or the 11 million Americans of Nordic descent often make it out to be, just as it is not the quasi-commie, statist gulag that those on the right would often have us believe.

And global and domestic events are conspiring to make life a little more uncertain for these former high achievers. I am not just talking first-world problems, although those are definitely a Scandi specialty — at a recent dinner party, I heard one woman complain that her son's preferred university did not offer the surfing degree he wanted. Rather, the Scandinavian model's structural fissures are coming under increasing stress.

Plummeting oil prices have made the Norwegians jumpy, for instance. The oil boom that began in the early 1970s transformed them from the butt of country-bumpkin jokes to the Beverly Hillbillies of the north. But now that revenue is declining, and their economy is stuttering for the first time in decades.

Meanwhile, the Norwegians seem to have lost their parsimonious, workaholic, Lutheran mojo. Norwegians treat Friday as a "free day" and take more sick leave than anyone else in Europe, if not the world – a law enshrines their right to claim sick days even while on holiday. And they don't want to work in fish-processing factories anymore. They've delegated that to cheap foreign labourers, while, at the same time, the popularity of the right-wing, anti-immigration Progress Party indicates declining tolerance for those very outsiders.

Sweden, too, has its problems. It is struggling with increasing racial tension – as evidenced by the firebombing of a mosque in Eskilstunaon on Christmas Day.

It has also seen the rise of a hitherto gagged right wing. The Sweden Democrats party, which has its roots in the neo-Nazi movement, won 13 per cent of the vote in September's general election. Some credit its rise to Sweden's "open door" immigration policy; others point to the poor integration of those immigrants and their resulting overrepresentation in crime and unemployment figures.

Either way, the party's electoral success prompted hasty political horse-trading among other parties intent on keeping extremists as far from the levers of power as possible, which in turn prompted allegations that Sweden's political establishment was subverting the democratic process. This has distracted from the slowing economy, increasing state and household debt levels, and one of the highest youth unemployment rates in Europe.

Denmark took a bigger hit than its neighbours following the 2008 global economic crisis, which increased pressure on its massive welfare state, funded by the highest taxes in the world. Household debt is the highest in Europe (any connection there, I wonder?). And there is a nagging suspicion that the universal, free education and health care we receive are not as good as they should be. Danish schools perform poorly in international rankings, and the country has the world's highest cancer rates.

Like the Norwegians, the Danes appear to have taken their foot off the gas. They too enjoyed an oil boom, albeit a rather more modest one that peaked in the 1980s, and along with the Norwegians they work among the fewest hours a year of any Europeans.

In Iceland, a combination of ultra-Nordic social cohesion – bluntly, nepotism – combined with Milton Friedman-style rampant monetarism led to the near-bankruptcy of the entire country. This wasn't just a question of bonkers bankers, but a kind of collective giddy spree that saw ordinary households taking out sophisticated yet reckless loans in yen or mortgages in Swiss francs. The Icelanders are recovering after a fashion, but their pride has taken a mighty blow, they still owe an awful lot of money, and few outsiders are prepared to lend to these semi-feral mavericks.

Finally, Finland is dealing with the double whammy of a loss of trade with Russia after the European Union imposed Ukraine-related sanctions and the decline of its golden goose, Nokia. Prime Minister Alexander Stubb recently blamed Apple for the country's economic woes: the iPad killed off Finland's paper industry, he moaned, while the iPhone destroyed Nokia.

The Finns also have a colourful portfolio of demons and taboos with which to wrestle, ranging from binge drinking (alcohol is the No. 1 cause of death for working-age people) to one of the highest homicide rates in Western Europe. There was a particularly nasty double axe murder in Oulu last week.

All that said, the Nordic countries do remain true lands of opportunity. There is far greater social mobility here – freedom for people, regardless of background, to fulfill their potential and rise up the income scale – than there is in the States. Scandinavia also has relatively low crime, great public transportation and low-cost day care.

But here are just two Scandi-paradoxes that might make you hesitate before signing on a nice penthouse in Turku: these countries that do so well in life-satisfaction surveys also record the highest consumption of antidepressants in the world, and despite their reputation for gender equality, they have the highest rates of violence against women in Europe.

I suspect that few Americans would truly embrace a Scandinavian-style society. The tax rates alone would likely be a sufficient deterrent. Though I'm a freelance journalist, I essentially work until Thursday lunchtime for the state. And it's not as if the money that is left in my pocket goes all that far: these are fearfully expensive countries in which to live.

The Scandinavians' collective modesty, distrust of boasting and self-censoring of ambitions would also be hard for Americans to comprehend, I suspect. A Danish acquaintance who lives in Washington was recently back in Copenhagen having coffee with friends. She remarked, proudly, that her son was doing especially well in math. "There was a silence, and then someone changed the conversation," she told me. "If I had said he was great at role-playing or drawing it would have been fine, but it was totally wrong to boast about academic achievement."

Even if you are willing to accept such downsides, there is no exportable model for turning a country Scandinavian. These lands have evolved into the flawed, fascinating paragons of civilization that they are today over many centuries, through a combination of unique historical events, religion, geography and climate — to which some might add DNA. There is no secret to replicate their success.

Put it another way: I'm not saying the Nordic miracle is over, but it was never a miracle. And it's over.

Booth, a British journalist, is the author of The Almost Nearly Perfect People: Behind the Myth of the Scandinavian Utopia.