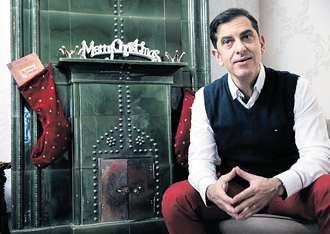 A Finlandified Canadian lawyer and gaming company consultant, André Noël Chaker, has taken to becoming the Niilo Tarvajärvi of the digital age.

Chaker has lived in Finland for twenty years and truly believes in Santa Claus and wishes that others would as well. It is a much better business than it has been understood to be in Finland, he says. American economists even have their own term for Christmas economics: santanomics. Contrary to estimations of Finns, the brand price of Santa and Christmas should be counted in billions, says Chaker.

For the Christmas markets he also wants a children's book in English based on Santa's childhood. For that he crowdfunded the first publication in December. Niilo Tarvajärvi isn't a good comparison, says Chaker. Tarvajärvi's projects namely failed.

"My project on the other hand has begun really well."

In December, Chaker collected 10,000 Canadian dollars worth of support from private individuals to fund his Santa's Dream book. This amounts to around 7,200 euros. Kickstarter-crowdfunding hasn't yet been offered to Finns for creative projects such as books.

He considers the sum he collected a good start to his book's success story. Internationally only every other campaign succeeds to collect its target sum. Chaker succeeded in 27 days.

"Kickstarter recommends that you collect money for less than a month. If the goal hasn't been reached in that time, there isn't really hope that people will be interested in it."

But why did Chaker collect money for his book project from volunteers online – especially when he already has a publisher in Finland?

There are a lot of reasons, Chaker says. "My aim was to explore how such a great story and the export of Finnish values really works. One of my goals was to find a significant publisher in English."

Crowdfunding turned out to be an excellent way to market the book in advance, says Chaker.

"I was testing ideas. I got tips from colleagues and others in the field. I managed to create promo-material that I would have needed for marketing in any case."

In Finland, Chaker's publisher is WSOY. With crowdfunding he is prepared to conquer America.

"I've kept the rights to the English version for myself," he says.

For the publishers, it was something new that Chaker was also looking for funding through crowdfunding, but WSOY welcomed it. According to the publisher, crowdfunding allows for a new chance to market in advance and get an idea of market demand.

"It was one way to ensure that there was interest, and to assure American and Canadian publishers that hey, there is demand," says Chaker.

Chaker's friend Linda Liukas inspired him to crowd fund. Liukas, a Finn who lives in the US, is a superstar of crowdfunding. She runs female coding events collective Rails Girls, and last year crowdfunded money for her children's book on programming. Her original aim was 10,000 dollars, which she gathered in two hours. All together she collected 380,000 dollars, so about 320,000 euros.

Crowdfunding interests a more alternative and technologically interested people. Chaker sensed that his topic of Santa Claus, a familiar fantasy story, was perhaps too mainstream for this crowd.

"This was maybe too Disney to trend on Kickstarter's top lists."

For his project, Chaker made quite a few books and videos presenting Santa Claus. Chaker received help from the tourism office in Rovaniemi and support from the town's management. The videos presenting his book were filmed in Santa's hometown by the Arctic Circle. To make the video, Chaker recruited a young professional. The budget for three days of filming was altogether 2,000 euros.

"This 2,000 euros of investment allowed me to collect 10,000 euros. I refuse to take money for advertising. I don't think it fits the picture when there's crowdfunding involved. It will be different when the book is ready."

Chaker admits that usually projects in Kickstarter don't gather so much money. In the children's book field, this is probably not a surprise.

"The sum has to be proportional to the money usually used for children's books both in Finland and the US. I managed to gather five times the amount than a children's book author would have gotten as an advance payment from the publisher. As an unknown author, I wouldn't have gotten anything."

Marketing to the US and the UK has, however, only just begun. Chaker does this alongside his work. He has formerly been an adviser at Veikkaus and is currently a gaming company consultant and a popular lecturer. Speakerforum's customers chose him as the Speaker of the Year a few years ago.

These networks were also helpful when it came to crowdfunding.

All together, 155 people funded Chaker's book. He gathered most of the money from his acquaintances and through his network.

"It is always the case, that to begin something new you need to coax your network to support you. Crowdfunding is a way to activate your own community. It is like premarketing for your actual product."

Two out of three crowdfunders for Chaker's project were acquaintances or friends of acquaintances. One half of those donating were from Finland, a third were from Canada.

"The rest were from the US and Europe, where I also have a lot of friends."

Now that he has achieved his goal, he needs to fulfil his promise.

"In crowdfunding it is important that the action is considerate," reminds Chaker.

Those giving money will get an English copy of the book by June.

The story is almost ready. The first chapter of the book has been available for reading and downloading on his webpage, from which he has gathered feedback.

"There have been great ideas both from the publisher and the readers. This story is an ethical one, in the league of Harry Potter or Lord of the Rings."