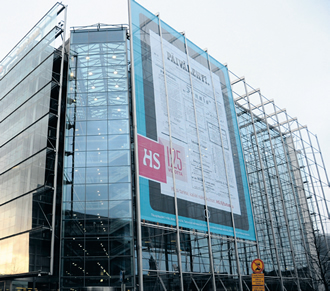 Do you remember what news was on the headlines last month, last year or 10 years ago on this date?

Finland's national newspaper, Helsingin Sanomat has just turned 125 and its future, like the future of all other printed papers, has never looked grimmer. The past has on the other hand been glorious and diverse. The first issue of the paper came out in 1889. Back then it was called Päivälehti, simply "The Daily". Since then, the paper has reported a remarkable volume of news to its readers.

To honour its 125th anniversary, Helsingin Sanomat has published a collection of its historical front pages as a book. Pages are reprinted in their original format, just like they were printed back in the day they when they were fresh out of the press.

Looking back at what made it to the front page throughout all these years is fascinating. Major events such as the Finnish independence on December 1917 and the civil war following shortly in January, the two wars with Russia and the fall of the Soviet Union in 1990, the rise of the Finnish shipbuilding and paper industry and the birth of Nokia have all made front-page news. The sinking of Estonia and tragic school shootings a few years ago also make an appearance.

The book includes lots of hidden treasures as well, such as events, trends and thoughts you weren't aware of or have been forgotten. The advantage of hindsight, of course, makes the read even more thought provoking.

Unfortunately one may get the impression that some controversial points regarding both Finnish and international history, such as the union of Finland with Nazi Germany, have either been left out of the selection or covered summarily.

The book is naturally in Finnish, but the abundance of images makes it interesting for readers with rudimentary or no knowledge of the language as well.

Interestingly, in contrast with most foreign newspapers, Helsingin Sanomat has placed adverts on its front page since the beginning, and some of the companies advertising their products and services still exist. Fennia is still providing insurance and Castren and Snellman still offer legal services.

"Speedy" Steam ship trips advertised on the front page in the 1890s sound antique to us now. How will the future generations see the headlines and adverts of our era? Will there be any trace left from our digital social media chitchat and tweets?