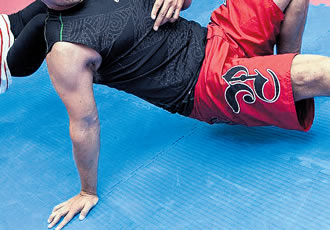 Intensive training HIIT, an acronym for high intensity interval training, is a fight against pain. A couch potato should start a training regime of a softer kind so interest won't slump from the start, experts say.

A 30-second quick workout at full exertion and then a rest. It has the same effect as a traditional fitness training, but takes half the time.

It is as if it had been created in a powerhouse; think those who have just made New Year's resolutions, whose calendars show no space for sport.

HIIT has become a trendy sport over the last year, and is often offered at gyms.

"Sportspeople have been doing interval training for a long time, but it has become branded as fitness training only within the last couple of years," says personal trainer Marko Kuoppasalmi.

High intensity interval training can be done on a bicycle, by running, by bench pressing or even by squats.

It differs from traditional training in the sense that the training is done for a shorter period of time and with as much power as possible. There is time for a small rest between exercises.

Hannukainen still wouldn't recommend it for everybody.

"Interval training is about fighting against your pain threshold. It is not dangerous, but uncomfortable and not everyone enjoys tormenting their own body," says Hannukainen.

As an example, bicycling at full power for a short period of time causes pain, according to Hannukainen, when lactic acid rises to the thigh muscles.

Intensive training on its own is also mentally challenging.

"It can be really demanding to exert yourself to your limits many times a week," says Hannukainen.

Like Hannukainen, Kuoppasalmi doesn't consider interval training ideal, at least as the only form of exercise.

"Even a generally fit couch potato can do interval training. Yet as for all intensive training, there are still risks. If you're older than 50 and have gained some weight, training should be built at a speed that's suitable for the individual," says Kuoppasalmi.

He also considers interval training one sided. "It would be preferable to combine it with warm up and cool down exercises," says Kuoppasalmi.

Hannukainen recommends interval training for those who already have experience in training and regular exercise. "Then the pain won't be a surprise."

If an individual is habituated with walking with Nordic walking sticks on a flat surface for a long period of time, it can be beneficial to try interval training.

"Intense training gives a good contrast to endurance training, and workouts that may even be numbing," says Hannukainen.

If an individual exercises for example five or six times a week, one or two training sessions could be replaced with interval training.

What, then, should a couch potato do, who has made a New Year's resolution to exercise more? Hannukainen recommends beginning with a 20-minute jog twice or thrice a week combined with one or two visits to the gym.

"When you start moving from nil, a typical mistake is to begin too hard. At the same time, you kill your enthusiasm," says Hannukainen.

According to her, a jog should make you sweat and a little out of breath, but at the same time one should be able to chat with a friend.

When the length of the jog has been extended to a half hour and an hour and the routine has been going on for two or three months, Hannukainen suggests including interval training once or twice a week to add motivation.

Kuoppasalmi agrees that the worst mistake is to start getting into shape "running after quick gains".

A basic goal can be, for example, losing 3 kilos. Different forms of measuring one's body are also good ways to set goals and give motivation, says Kuoppasalmi.