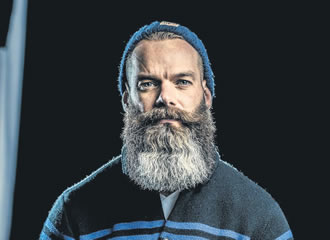 TEEMU Potapoff looked up to bouncers upon his very first visit to a watering hole at the age of 18. "They were alpha male among men, authoritative but more intimate than police officers," he recalls.

Potapoff at the time dreamt of becoming a pastor and was prepping for an entrance examination to study theology while spending his evenings at the gym. He accumulated work experience as a gym receptionist, a moving company worker and a parish youth worker.

Being talkative and not afraid to get his hands dirty, the young man did not hesitated when one of his gym buddies suggested they should take a gig as bouncers at an after party held by the Hanken School of Economics.

It was the start of his now well-known career.

Potapoff first worked at the door of the strip club Mermaid, then at Malmintori. He came to know the local watering holes while continuing to study theology. He began his six-year stint at the door of Club Ooppera, a nightclub housed in the southern end of Töölö Sports Hall, in the early 2000s.

Many party-goers from these years remember Potapoff for his firm approach to the job.

The legend goes that the bearded bouncer once "tussled with a half dozen Koreans".

The story is true, Potapoff admits. "The group was spending the night at the club, and one of them threw up. I threw him out, but the rest of the group didn't appreciate that. There were 15 of them, 2 of us."

The fight was over before long. Potapoff and his colleague were patched up at the Meilahti Hospital, and some signs of the scuffle on his body are visible to date. He did continue working, however. "If you start to be afraid of such situations, it's better to stay home."

Potapoff continued studying theology while working, but his dream of becoming a pastor was beginning to fade. "I realised that who am I to tell elders how they should live their lives," he explains.

He emphasises that he is nevertheless a religious man who is annoyed by the clamour stirred by the recent comments of Päivi Räsänen, the chairperson of the Christian Democratic Party. "Who are any of us to comment on the lives of others? God is greater than all of us, and He knows," he exclaims.

Although Potapoff, nicknamed "The Pastor" by the owner of Töölö Gym, is only a single mandatory Swedish course short of his master's degree in theology, he prefers not to preach to his customers.

"I don't treat customers as a single mass. A bouncer must be a gentleman who is ready to take action, and a business card for the restaurant."

Potapoff has demonstrated his willingness to take action. One weekend while standing at the door of Club Ooppera, he saw an intoxicated girl with a hood over her head dart onto the road in tears, giving the approaching taxi no time to slow down.

"I can still see how the car hits the girl and she flies into the street," he recalls.

He was the first person on the scene of the accident. Paramedics were alerted to the scene, and Potapoff was later told that the girl had pulled through.

Yet, he continues to shudder as customers stagger into the streets after a night out. "I hope that people would take responsibility for themselves also when they're drinking. Even if you're wasted, a motorist doesn't know that."

Friendship at the door

Luckily, most of his experiences as a bouncer are positive: Potapoff estimates that 99 per cent of his close friends have entered his life through his career. Although he may not have the time to chat at the door, people find it easy to approach a familiar face at the gym and on the streets.

Being on friendly terms can also help resolve problems. "It's easier talking to a customer who's had too much to drink if you can call them by name," Potapoff explains.

Potapoff, who today makes his living as a journalist for Nelonen, continues to spend his weekends at the doors of nightclubs largely due to the number of customers he knows. Some of them he got to know already during his six-year stint at the door of Club Ooppera.

You should not become too intimate, however: for example, you should always ask before fondling the ample beard of Potapoff. "It's incredible how much attention the beard draws. I hope that people would consider the fact that it's a part of my face. I don't know where their hands have been, and I don't want them anywhere near my mouth."

The seasoned bouncer also has a few practical tips for the wintertime. "Dress warmly, women especially. Spending the next few weeks with a urinary tract infection is unpleasant. Wear your miniskirt under ski overalls."