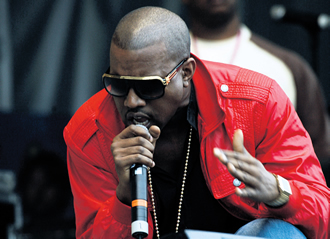 One of the pop world's megastars, Kanye West, paid a flying visit to Finland on Tuesday, but he was not here to perform a gig.

Sasu Kauppi's name is unlikely to ring many bells in Finland even though by rights it should.

Some years ago, with a BA in fashion design from Aalto University under his belt, Kauppi headed to England to top up his qualification to a master's degree at the prestigious Central Saint Martins art school in London. After gaining his degree and winning the Dunhill Award in 2011, Kauppi decided to set up his own, eponymously named clothing brand.

To start with, Kauppi focussed on unisex clothing and men's fashion, such as bomber jackets, hoodies, baggy shorts and caps, but has later on expanded to women's clothing. His clothes feature clean lines and materials selected on the basis of their durability: denim and cotton jersey.

In spring 2011, while still living in London, Kauppi said to his friend that if the Finnish ice-hockey team won the world championships, he would make it the theme of his next collection.

Kauppi put his money where his mouth was and introduced a new collection in 2012 which fused the white and blue colours of the Finnish national flag with influences from ice-hockey gear.

"When I graduated from London I was kind of exhausted with the place and wanted to come back to Helsinki. I love it here. For some reason I wanted to do my own thing first and then maybe work for someone later. It was really crazy," Kauppi explained in an interview with the online magazine Dailymetal in April.

Kauppi is a film aficionado who says that his 2014 collection was inspired by the futuristic skateboard style of Back to the Future films.

His next collection, to be launched in 2015, is strongly influenced by the uniforms in Alien and the monster created by H.R. Giger. 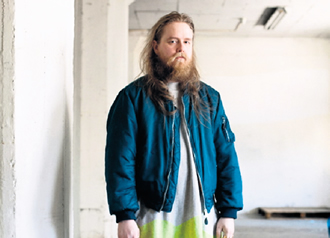 In Finland, Kauppi's clothes are only sold by the online store Acolyth and the designer himself. Currently, the biggest markets for Kauppi's brand can be found in Asia: Hong Kong, Taiwan, Malaysia and Japan. He also has stockists in the United States and London and has set his sights on New Zealand next.

Kauppi works in Jätkäsaari in Helsinki where he has a studio near Verkkokauppa.com. The designer runs an open house: in the summer, he sold left-over items from his old collections to customers who dropped by his workshop.

I also decided to visit the studio where I met the relaxed and polite designer in a fuss-free atmosphere. There were no bells and whistles, but cold refreshments were available in the form of juice and soft drinks served from a bucket.

Kauppi carried a full-length mirror into a room next door and said we could take as long as we liked trying out the clothes. Collaboration with a superstar such as West, who has a huge following and is constantly featured in magazines, cannot but succeed in delivering results. Sasu Kauppi is set to become the next big brand from Finland.