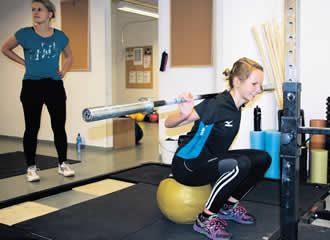 "You can do it! I'm here for you!" assures Thomas Claesson, a CrossFit coach at Wolverine Helsinki club. He is speaking to a lady squatting with 70 kg on her shoulders. And she truly can.

I am excited when I approach the gym. I have heard so much about CrossFit: how it's terribly hard at first, but then addiction arrives with haste. Combining functional movements taken from daily life, this workout has spread around the world like an epidemic.

Established in 2000 in the US, CrossFit is now practiced in more than 11,000 affiliated gyms worldwide under more than 35,000 coaches. It is growing in popularity in Finland as well, Claesson tells me, taking a moment out from instruction. "I think it's because of the big variety of movements that can attract people with various backgrounds, like in weightlifting or martial arts. It's good for all active people!"

It is not only for those already physically active – CrossFit also attracts those less inclined to get off the couch, emphasises Thomas. Although CrossFit is high intensity training, it's scalable for everyone. "Physically, any kind of person could come to CrossFit, but the most important thing is to find an individual level to practice it," Claesson explains.

As not all people can do the exercises with the same rigour, coaches provide alternatives and help to figure out how to build up their strength or continue working out after an injury. Thomas himself started CrossFit after he was forced to quit basketball due to a sickness.

In most gyms where CrossFit is instructed, newcomers commence with a beginners' course, which Claesson strongly recommends, as it gives the technique and knowledge of all the basic movements. At Wolverine, it's also possible to just come and try out a class for the first time, just like I have.

We start with a warm-up, a game similar to dodge ball: you throw a ball at someone, call their name and if they fail to catch it, they receive a punishment of five sit-ups. If they succeed, it's your turn to be punished. Seven minutes pass by quickly and I now know all the names of the ten people around me, which is the optimal group size that coaches try to keep in order to be able to concentrate on each individual.

They truly manage to do that – during the next part of the workout we practice weightlifting with bars only to ensure that our technique is good. "Legs a bit more narrow, right, and now lower!" instructs Claesson, referring to my squatting technique. After this, we gather around a white board and Claesson explains what today's first 20-minute workout consists of, while the other coach Miska Toivonen demonstrates the exercises practically.

The fitness group completes two different weightlifting exercises with a bar and then a burpee: a squat, kicking your feet back to a plank position, doing a push-up, squatting again and jumping up. The advanced group does three weightlifting movements. Although I'm using only a 10 kg bar, while others lift 30-50 kg, I still have trouble keeping up.

Building up a community

I am no couch potato and train five to six times a week, but mainly in long-distance running. At my previous gym, I practiced BodyPump, which also uses weights and bars a lot, but I must admit that I haven't done that in more than a year now. I can really feel it now!

We then move on to the next block of the workout, back squats that we do in groups by taking turns. "You have lifted 50 kg six times before, so this time, more?" suggests Thomas to one of my group members. I see that they really keep track of people's results.

I try my first ever back squat – I take the bar of 15 kg on my shoulders, step back and squat so low that I'm almost sitting on the ball that's on the floor. When later my group suggests that I try with 25 kg, I can barely get up from the squat. At the same time, women of my size are lifting 50 to 70 kg. That's what practice can bring you in CrossFit. The weight is increased with every turn and Thomas is right there, providing backup. As this international group marks down their results on the white board, I feel that this really is a community. Even I write down my six squats.

When I leave the gym after a bit of stretching, I feel unusual heaviness in my muscles that doesn't occur after my regular workouts. It's even hard to push open heavy doors and I can't keep my regular tempo in running the usual 500 metres through the station to catch a train back home. With this in mind, maybe I should do CrossFit more.