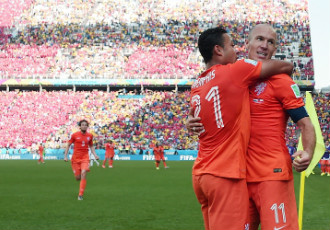 After an emphatic win over Spain and a had-earned one over Australia, the Netherlands continued their winning ways at the FIFA World Cup in Brazil on Monday by beating Chile 2-0 in their final game of the group stage.

The Oranje thereby secured their place in the round of 16 as the top team in Group B.

Chile on Monday enjoyed 64 per cent of possession but struggled to turn their dominance into genuine scoring opportunities, only managing one shot on target. The Netherlands, in contrast, were disciplined and ruthless, clinching the victory with two late goals in the second half.

Substitute Leroy Fer broke the deadlock 13 minutes before full-time with a powerful, free header after a deep cross from Daryl Janmaat. Arjen Robben set up the second goal of the night two minutes into injury time with a trademark blistering run to the byline before threading the ball to Memphis Depay for a simple tap-in finish.

The Netherlands were both direct and efficient. Chile, in turn, were left to rue a couple of penalty decisions but will regardless advance to the first knock-out round of the World Cup. In the round of 16, the Netherlands will face Mexico on 29 June and Chile hosts Brazil on 28 June.

Despite advancing to the final of the 2010 World Cup in South Africa, the Oranje have exceeded expectations in Brazil. Their squad consists primarily of players from the Dutch Eredivisie and players from mid-table clubs in other European leagues. Monday's goal-scorer Fer, for example, plied his trade for Norwich last season as the club were relegated from the English Premier League.

Instead, the success of the Oranje is largely attributable to their realist and seasoned manager, Louis van Gaal. In Brazil, the Dutch have adopted a surprisingly direct approach, relying primarily on long balls and Robben's runs to create scoring opportunities.

Thus far, the results have been impressive.