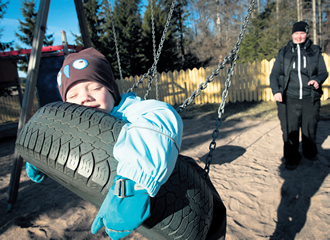 Life with a four-year-old was hard. Nothing seemed to really work out. Joonas Luukkonen was defiant and angry.

Mother Outi Luukkonen was worried about the boy coping in a big group.

"The child health clinic advised us about the Voimaperheet (Power Families) training taking place online and via the telephone. The threshold to join was low, so I was excited right away."

She has now completed the studies, which lasted four months. Her quality of life improved markedly during the studies.

"The learned methods are in use, for example, foresight. Indeed, a child does not function like a machine, a fact one must keep in mind in the mornings, so that the departure to the day care centre goes smoothly," Outi Luukkonen says.

"I first try to wake him up carefully and let him rest, I tell him all the time what is going to happen next, and I give him time. In this way, the child experiences success when the departure takes place without anger."

A model for training

According to Professor Andre Sourander, who is in charge of the study, the family training model is the first low-threshold one in the world for under school-aged children. Sourander wants to extend it to all child health clinics in Finland.

"The prevention of conduct disorders at an early stage saves money. The child health clinics have shown great interest, but the problem lies with the decision-makers. It seems like child protection finds it difficult to invest in something not based on correction."

Sourander reminds us that correcting the consequences is more expensive than prevention. The cost is about a million per one person.

A family may access online coaching almost right after visiting the child health clinic, whereas the queue for mental health services is usually at least six months.

500 families in Southwest Finland participated in the Voimaperheet study. At the child health clinic, the parents of all four-year-old children were given a form to fill out which assessed how challenging the child's conduct was.

The parents of the approximately 15 per cent assessed to be the most difficult were directed to the study. Half of the children studied participated in the coaching programme, and the other half acted as the control group.

The ones who have participated in the training sessions are satisfied: they interact with their child better than before, and they have less stress.

"The parents do not have to go anywhere, and there is no fear of being stigmatised. They learn skills, how to act with children at home and outside the home. The website contains videos, instructions and tasks. A central part of the studies is a family coach, who calls every week," says project manager Terja Ristkari.

There are plans also to make a smartphone application of the Voimaperheet website. In this way, the support network for parenthood travels with the family.

Outi Luukkonen was surprised by the simplicity of the model.

"Anytime I felt unsure, I had support right there. I actually started to wait for the family trainer's phone call."

Along with the training, the families received a sticker chart, which is in heavy use at home. One receives a sticker for, for example, going to bed successfully. When one has three stickers, one gets a prize, a chocolate pudding, for example.

At the Luukkonen family, mother Outi participated in the training. Father Tero Luukkonen received the information in mutual conversations.

"All parents should go through this type of training," says Outi Luukkonen.

Parents have been left alone since the 1990s, reminds Docent Matti Rimpelä from the University of Tampere.

"At the same time as municipalities put more money on reception counters, the association side makes good initiatives. Still, they are like a drop in the ocean."

In Oulu, the Friends of the Young association offers free personal training for parents. A personal trainer meets with parents five times in total and also makes home visits when necessary.

The service belongs to the Parents' Academy, which was created by the association. It has become very popular in the area. Thousands of parents have attended the family training lectures and courses during the more than two years.

"The Parents' Academy is now expanding also to municipalities outside the area. This is real preventive work done at small cost," says project manager Riitta Alatalo.