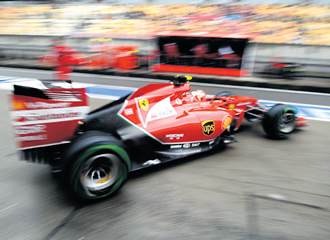 Race after race, Kimi Räikkönen has found it more difficult to master the intricacies of the F14T Ferrari than his teammate Fernando Alonso. The Finn was the eighth driver to cross the finish line in Shanghai, whereas Alonso finished third in the Chinese Formula One Grand Prix domineered by Lewis Hamilton of Mercedes.

The Finn was after the race asked to share his thoughts as to why he has yet to get the best out of the F14T car and whether he believes he can make the necessary adjustments in his driving style.

"The new tyres work well until the grip from the rear tyres goes away. Then you have to go slower, and you start cooling down the tyres more. Everything goes around and around, and you can't fix it."

"It's a thing that everybody hates, but there's no magic [to it]. I can't necessarily change everything with my driving," commented Räikkönen.

In addition, he reminded that situations in the races have hardly helped his task. "I could've done two stops, but the safety car changed [the race]. It works for you at some places and then against you in others," he said.

"We just have to find the solutions [...] and hopefully not end up with similar issues. Once you're there, it's hard to get out – especially in the race."

Overall, the Formula One weekend in China proved extremely difficult for Räikkönen, who was unable to complete a timed lap in the first practice session and failed miserably in the wet conditions of the qualifying round.

"A difficult weekend overall," Räikkönen acknowledged. "For what reasons, I don't know yet. Hopefully, we'll find a reason or at least a cure to fix it, whatever it is."

Räikkönen bagged four points for his eight place in China, while Alonso climbed to third in the Formula One standings – 30 points ahead of his Finnish team-mate.

"I was quite satisfied with the car in Bahrain, even if the race was ultimately a disappointment. I had some issues to start with here [...]. It's just been a difficult weekend. That's how it goes sometimes."

"At least I got a few points," Räikkönen said.

"Overall, it was a better weekend for the team, and it will for sure give a good feeling, because they're working hard to improve things."