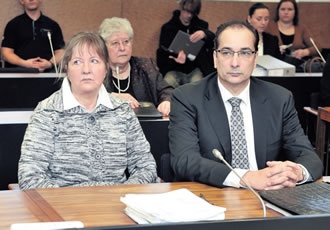 THE Supreme Court has dismissed the leave to appeal by a Helsinki enrolled nurse, sentenced to imprisonment by the District Court of Helsinki for the poisoning of a number of elderly patients, between 2004 and 2009. In a verdict later affirmed by the Helsinki Court of Appeal, the district court sentenced the defendant, Aino Nykopp-Koski, to life imprisonment for five murders, five attempted murders, three aggravated assaults, two aggravated thefts, two thefts and two drug offences.

In its decision, the court of appeal concluded that the murders and attempted murders were committed in cold blood, by administering non-prescribed drugs – primarily sedatives – to patients in poor health. The court also viewed that Nykopp-Koski took advantage of the patients’ trust in the medical staff. According to a psychological examination, the defendant is fully criminally liable for her actions, but exhibits, for example, a pronounced inclination to lie.

In addition, the nurse faces aggravated assault charges for, for instance, spiking her co-worker’s coffee with eye drops, and theft charges for stealing from the victims of poisoning. The police seized roughly 1,800 pills from her during the investigation.

Nykopp-Koski has consistently denied all accusations and – according to the defence counsel, Heikki Lampela – will not be satisfied with anything but the dismissal of all charges. “She is currently considering all possible instances, where to lodge an appeal.” The rejection of the leave to appeal, however, was not a surprise. “Essentially, the Supreme Court resolves cases, which concern the interpretation of a particular legal provision. This case would have been about re-evaluating evidence,” Lampela explains.

The case began to unravel after one of the victims was taken to a hospital near death. During the preliminary investigation, the police unearthed several graves of Nykopp-Koski’s victims.