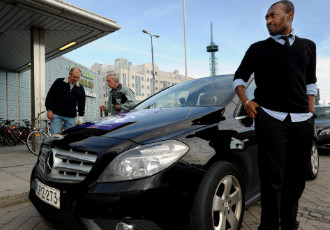 Roughly a dozen customers stand by the taxi stand at the West Terminal waiting for a taxi, while driver Masawud Magaji waits in his taxi. No one gets in.

“It makes me feel bad. For two or three hours, I think about what's wrong with me, should I quit working and move out of Finland,” Ghana-born Magaji tells.

He forgets the incident after thinking about it for a while, but the same may happen the next day. Over the past seven days, three customers have refused to get in a taxi driven by Magaji. “I think it's racism. There are a lot of customers. Only a few do that,” he underlines.

One of them is his fellow Ghana-born Stanley Nyarko Aboagye. “I'm in the line and a customer gets in the car. 'F**k, a negro,' he says and walks to the next car,” he describes.

In particular, middle-aged customers are inclined to refuse a ride, Nyarko Aboagye says.

Transport Workers' Union (AKT) is familiar with the phenomenon. “It's very real. It particularly affects black men,” says Jari Korhonen, a regional officer at AKT. Employers, Korhonen reminds, are ultimately responsible for the equality of drivers.

The Finnish Taxi Owners' Union contrastively says that it has yet to hear about the phenomenon. “It's outrageous especially if it involves racist comments. People have the right to choose their service provider, but if it's due to racist grounds, it can't be tolerated under any circumstances,” communications director Katja Saksa states.

Discriminatory attitudes can also jeopardise the safety of customers, says Nyarko Aboagye. “Work days are 9 to 11 hours long. You have to concentrate. If I face discrimination, I can't concentrate properly and start to make mistakes.”

The decision to refuse a taxi ride is not necessarily associated with racism. Elderly people, in particular, may presume that drivers of a foreign background do not speak Finnish.

Magaji tells about an elderly woman who got into another taxi due to her lack of English skills. “When she got in, we talked and she noticed that I drive really well. In the end, she thanked me and left me a two-euro tip.”

Anssi Roitto, the executive director at the association of taxi drivers in Helsinki, emphasises that all drivers should have a sufficient command of Finnish. “Without the necessary language skills, it would be impossible to pass the written taxi-driver test,” he reminds.

Only drivers who have demonstrated their skills and local knowledge in the test are permitted to drive a taxi. Of the roughly 3,500-4,000 active taxi drivers in Helsinki, some 10-20 per cent are of a foreign background, estimates Roitto.