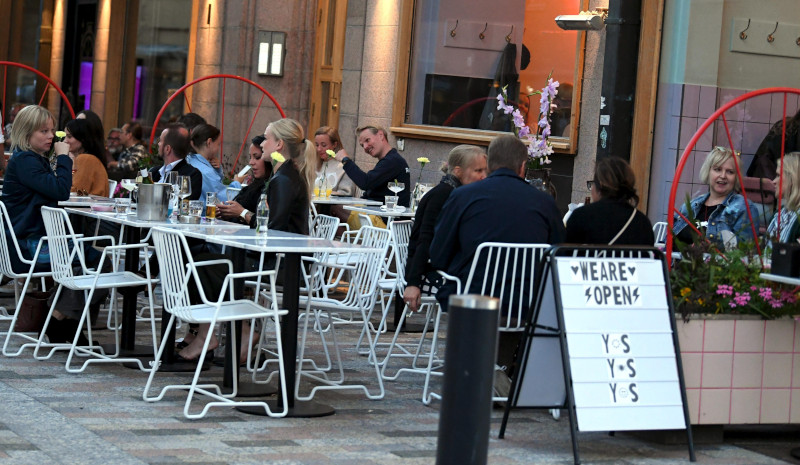 A restaurant at Iso Roobertinkatu, Helsinki/Lehtikuva

The Finnish government has elected to relax restrictions on restaurants and bars from Friday onwards. On Thursday, Krista Kiuru, Minister of Family Affairs and Social Services, announced that the ban on singing and dancing would be completely lifted across the country.

Restrictions on opening hours and capacity will remain in place for regions that are still in the community transmission phase of the epidemic. However, as of Friday, restaurants in these areas will be allowed to keep their doors open from 5 am to 1 am and serve drinks from 7 am till midnight—an extension of one hour.

Restrictions will no longer apply to areas currently in the acceleration phase of the epidemic such as East and North Savo and Kymenlaakso. While Uusimaa is officially in the community transmission phase, Ilta-Sanomat reports that restaurants in the Helsinki metropolitan area will no longer be subject to regulations.

Gambling monopoly Veikkaus has said that in light of the changes, it will reopen its slot machines in restaurants and cafés on Friday. The company will limit access to the machines in those regions where restrictions still apply.

The Finnish Institute for Health and Welfare (THL) also announced changes to its mask recommendations on Thursday.  As per the new guidelines, citizens are allowed to defer to their own judgement and use masks at their discretion.

However, the organisation still recommends using masks in crowded indoor spaces and on public transportation. It also urges those who have not yet received the vaccine to wear a mask.