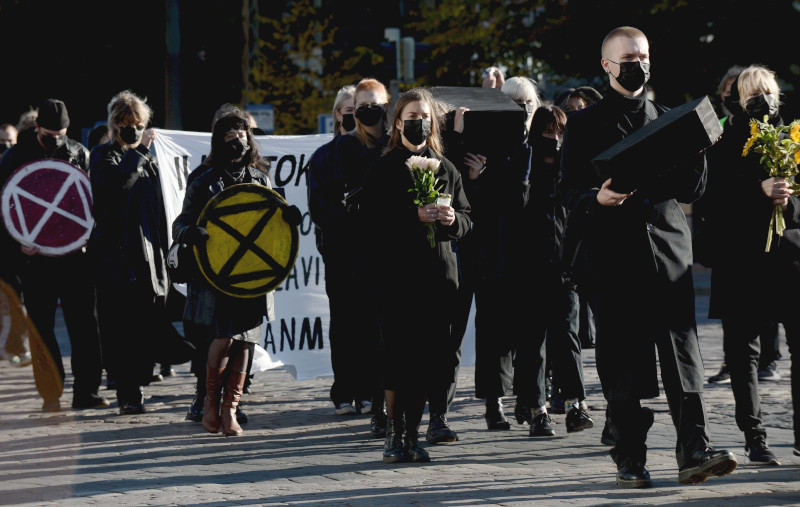 As a prelude to the 10-day protest, an Extinction Rebellion art group organised the "Stillborn" funeral procession for victims of climate change in Helsinki on Monday/Lehtikuva

Activists with Extinction Rebellion Finland (Elokapina) are set to gather at Mannerheimintie, the main thoroughfare in Helsinki, at 6 pm today for a demonstration that is scheduled to last for 10 days.

The group announced plans for the protest earlier this month. According to Extinction Rebellion, over a thousand people have signed up for the event. On Friday, police stated that the demonstrators had declined their request to move the venue to a safer location, adding that it will likely cause significant disruptions to traffic.

The statement also asserted that police will be liable to break up the protest if it endangers public safety or blocks traffic. Prime Minister Sanna Marin has commented on the planned event, saying that citizens have the right to express their opinion and she trusts that authorities will handle the situation appropriately.

“Of course, I do not consider breaking the law acceptable,” she told MTV. Minister of the Interior Maria Ohisalo has been criticised for not taking a stand on whether protestors should be permitted to intentionally defy the law.

The Extinction Rebellion movement has made its demands clear by staging multiple demonstrations over the past year, including one in June. Activists are calling for the government to declare an environmental emergency and bring forward Finland’s deadline for achieving carbon neutrality to 2025.

According to Yle, Helsinki Police have also been notified of a counter-demonstration to protest against Extinction Rebellion set to be held at the same time and place today.