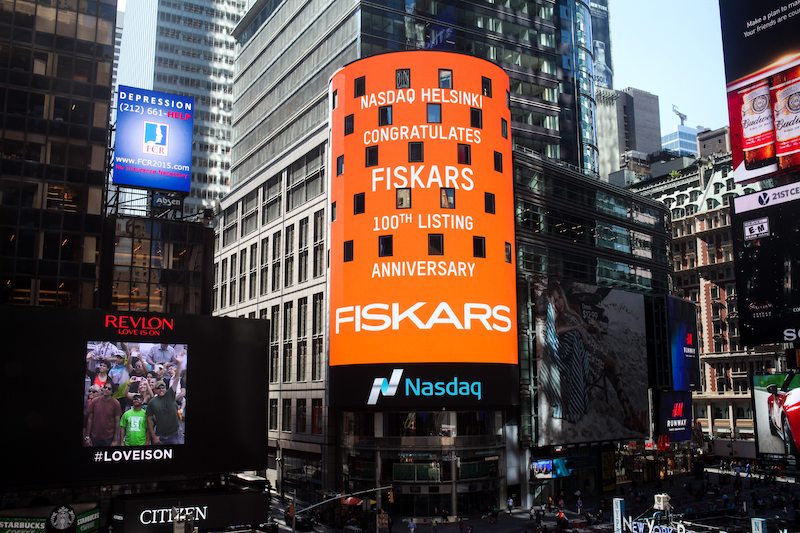 A 2015 shot of New York's Times Square, where Finnish company Fiskars received a digital congratulations for the 100th anniversary of its listing on the Helsinki Stock Exchange (Image: Lehtikuva)

IT IS IMPOSSIBLE TO TELL THE STORY OF FINLAND without lengthy input from its larger Western neighbour, Sweden. After all, Finland was a part of Sweden for more than 700 years, with many of Finland’s most illustrious historic figures themselves hailing from Swedish families.

Nowhere are the links between the two counties more apparent today than in the realm of business and commerce. A look at some of the largest, most valuable, and most influential companies active in Finland today reveals the extent to which Swedish talent, money, ideas, and even royalty have played a core role in Finnish industry. Here are some of the surprising Swedish origins of Finland’s largest companies.

Fiskars is one of the most famous Finnish brands around the world today, most well-known for its iconic, orange-handled scissors (the distinct colour ‘Fiskars Orange’ has been owned and patented by the company for decades).

Fiskars produces a wide variety of home products for the global market, including branded products from Iittala, Arabia, Hackman, and Royal Doulton, boasting 6400 employees and more than €1 billion in annual revenue.

Although Fiskars is often hailed as a modern Finnish success story, its roots stretch all the way back to 1649, when a Dutch merchant first founded the company in the village of Fiskars, in Swedish-speaking Raseborg. Back then, Finland was firmly a part of the Swedish state, and it was Queen Christina of Sweden who signed the charter that brought Fiskars into being.

For the first few centuries of its existence, Fiskars produced wrought iron and water wheels. It wasn’t until the latest 19th century, when the company was acquired by Marshal Mannerheim’s uncle, Albert von Julin (themselves a Swedish-speaking family), that it branched out into homeware products.

Following the establishment of the first Fiskars scissor factory in the USA in 1977, from which it would produce more than 1 billion of its iconic utensils, the company quickly grew into a global powerhouse.

Nordea, with its global headquarters in Helsinki’s trendy Vallila neighbourhood, is a global financial titan. With more than €320 billion in assets under management and 9.3 million customers, it is the second-largest company in the entire Nordics (after the Norwegian state-owned oil giant Equinor).

While Nordea as we know it today is the result of a dizzying web of mergers between hundreds of different Nordic banks, the bulk of its history and origins prior to its move to Helsinki were distinctively Swedish in nature. First founded in 1820 as Sparekassen for Kjøbenhavn og Omegn, a Danish bank, it soon moved on to Sweden after merging with the Stockholm-based Wermlandsbanken of Sweden in 1832.

Soon after, the institution acquired a large number of Swedish banks, as well as a litany of smaller Finnish, Danish, and Norwegian holdings. The bank spent most of its history being headquartered in Stockholm and was even directly owned and operated by the Swedish government for years as a result of the 1990s banking crisis.

It was until 2018 that Nordea became a fully Finnish bank, moving its HQ to Helsinki for regulatory reasons and a desire to participate fully in the European Banking Union, which it could not do in Sweden. Today, it is one of Finland’s largest employers.

If you have ever tapped a hotel room key card onto a black door sensor, you have probably used an Assa Abloy product.

One of the largest manufacturers of electronic locks on the planet, Assa Abloy was formed as the result of a merger between the Finnish company Abloy and the Swedish manufacturer Assa in 1994, following a history that perfectly exemplifies the longstanding ties between Finland and Sweden.

Today, Assa Abloy continues to run under the brand name Abloy in Finland, where it is one of the most recognizable and respected brands in the country. Abloy, which was previously owned by Wärtsilä, was founded in 1918 as a lock-making company by Emil Henriksson, a Swedish-speaking Finn.

Over the subsequent decades, it grew to be one of the largest global manufacturers of locks. Originally, the plan was for Abloy to acquire the Swedish Assa outright, since it was the much larger company, and this is what the Finnish public was hoping for.

However, due to Abloy’s substantial financial problems, Assa had more leverage in talks and thus ended up acquiring Abloy, hence why it is headquartered in Stockholm today. In 2021, Assa Abloy employs 47,500 people in 70 countries, with more than €9 billion in assets.

With more than €8.5 billion in revenues last year and 24,400 employees, Helsinki-based Stora Enso is one of the largest forestry companies on the planet. The company’s portfolio of forested lands is larger in area than the US state of Connecticut and spans Sweden, Finland, Canada, Portugal, and Brazil.

It is also one of the oldest companies in the world, one with its roots in the annals of Swedish history. The first shares in the company – then named Stora - were issued all the way back in the year 1288, to the Bishop of Västerås in the Swedish city of Falun, where Stora Enso continued to operate until the 1990s. Following success in its early medieval mining operations, King Magnus of Sweden granted Stora its royal company charter in 1347.

Meanwhile, Enso, the Finnish component that Stora merged with in 1998, was originally a Norwegian company that was moved to Finland in the 19th century. After Stora Enso was formed at the turn of the 21st century, all central operations relocated to Helsinki, where the company continues to be managed from the iconic Aalto-designed office block overlooking the Kauppatori.

With tens of thousands of business and personal customers in Finland, Handelsbanken is one of the largest players in the country’s banking and financial sector. With €21 billion in revenue last year, it is the 73rd largest bank on the planet and the fifth-largest bank in Finland.

As the name suggests, the bank was founded in Stockholm as Svenska Handelsbanken in 1871, an early frontrunner in the savings bank movement that emerged in the Nordics at the time, largely as an effort from the middle classes to alleviate urban poverty.

The bank was a solely Swedish entity for most of its life, before expanding into Finland and the UK in the latter half of the 20h century. Handelsbanken established its first office in Finland in 1985 on Aleksanterinkatu, where it continues to operate today, and its Finnish division became a full-fledged Finnish bank in 1996.

Perhaps most notoriously, Handelsbanken stepped in to acquire the scandal-ridden SKOP bank in 1996, then one of Finland’s largest savings banks and one that played a key role in the disastrous banking crises of the 1990s. Today, there are 30 branches across Finland.