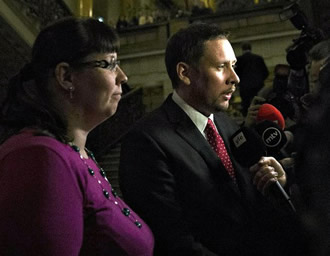 The Left Alliance announced late on Tuesday evening that the party will leave Finland's coalition government after refusing to accept the proposal for the framework budget.

Talking in a press conference held in the House of the Estates, the party’s ministers Paavo Arhinmäki and Merja Kyllönen said they would submit their resignations to the government later this week.

Arhinmäki and Kyllönen walked down the stairs in front of the building just before ten o’clock on Tuesday evening to make their announcement. According to them, the party’s decision to leave the government was not preceded by any talks with Prime Minister Jyrki Katainen (NCP).

“We explained that we could not accept the proposed package and there were no further negotiations on the matter,” Kyllönen said.

While the ministers stepped in front of the media to explain their decision, the aides of the government parties and a handful of ministers gathered on the balcony of the building’s second floor to witness the historic event, recording it with their mobile phones.

The Left Alliance parliamentary group said earlier on Tuesday that the austerity package needed to be tweaked or the party would quit the government.

The party’s unanimous stand was that the proposed package contained several problem points, such as the freeze on the social benefit index raises, which will hit the poor the hardest. Furthermore, the party said that the proposed child benefit cuts will target working parents on low incomes.

Arhinmäki informed Katainen of his party’s stance on the matter early on Tuesday evening.

All the other government parties accepted the package on Tuesday evening.

The Left Alliance leaving the government does not automatically lead to its dissolution.